Spritely Holocaust survivor Lily Ebert slowly rolled up her sleeve, exposing a faded Auschwitz tattoo. It was a powerful, strangely moving act the 97-year-old has repeated countless times while teaching about the horrors of her youth. This time, however, it felt different. This time Lily found herself in front of a Muslim national sporting figure who himself has been a victim of racism, then subsequently exposed for being antisemitic.

Former Yorkshire cricketer Azeem Rafiq, who gave testimony in Parliament earlier this month about anti-Muslim prejudice at his club, Yorkshire, was later revealed to have used hateful language towards Jews on social media in 2011.

After issuing an apology and saying he was “ashamed”, Azeem committed himself to learning about the Jewish faith and gaining an understanding antisemitism.

So, on Thursday, in an initiative instigated by Jewish News, Rafiq arrived at Kinloss Synagogue in Finchley to hear Lily tell her compelling life story and share its lessons.

Pointing to the faded ink on her left arm, she softly told Azeem: “We were not people anymore. We were numbers.”

???? // @AzeemRafiq30 meets Holocaust survivor Lily Ebert at @Kinloss_US as he continues to educate himself about antisemitism and the Jewish community. @DovForman pic.twitter.com/Zur0DoNKPt

Remarkably, the former cricketer admitted he’d not heard of Auschwitz before and told Lily at the end of her testimony it was important to tell her story “to remember, in order that events are not repeated.”

After giving her testimony, Lily said “when somebody is different, it doesn’t mean they are better or worse. We should be tolerant with each other”. Azeem asked Lily questions about her family and was given a copy of the memoir which he said he’d read.

The meeting was organised with Dov Forman, Lily’s 17-year-old great-grandson – who co-wrote her memoir, Lily’s Promise.

Rafiq was given a tour by Kinloss Rabbi Jeremy Lawrence, who explained the significance of the ark and many rituals in the shul. He was also shown a sefer torah, and heard Forman read from the scroll on the bimah. 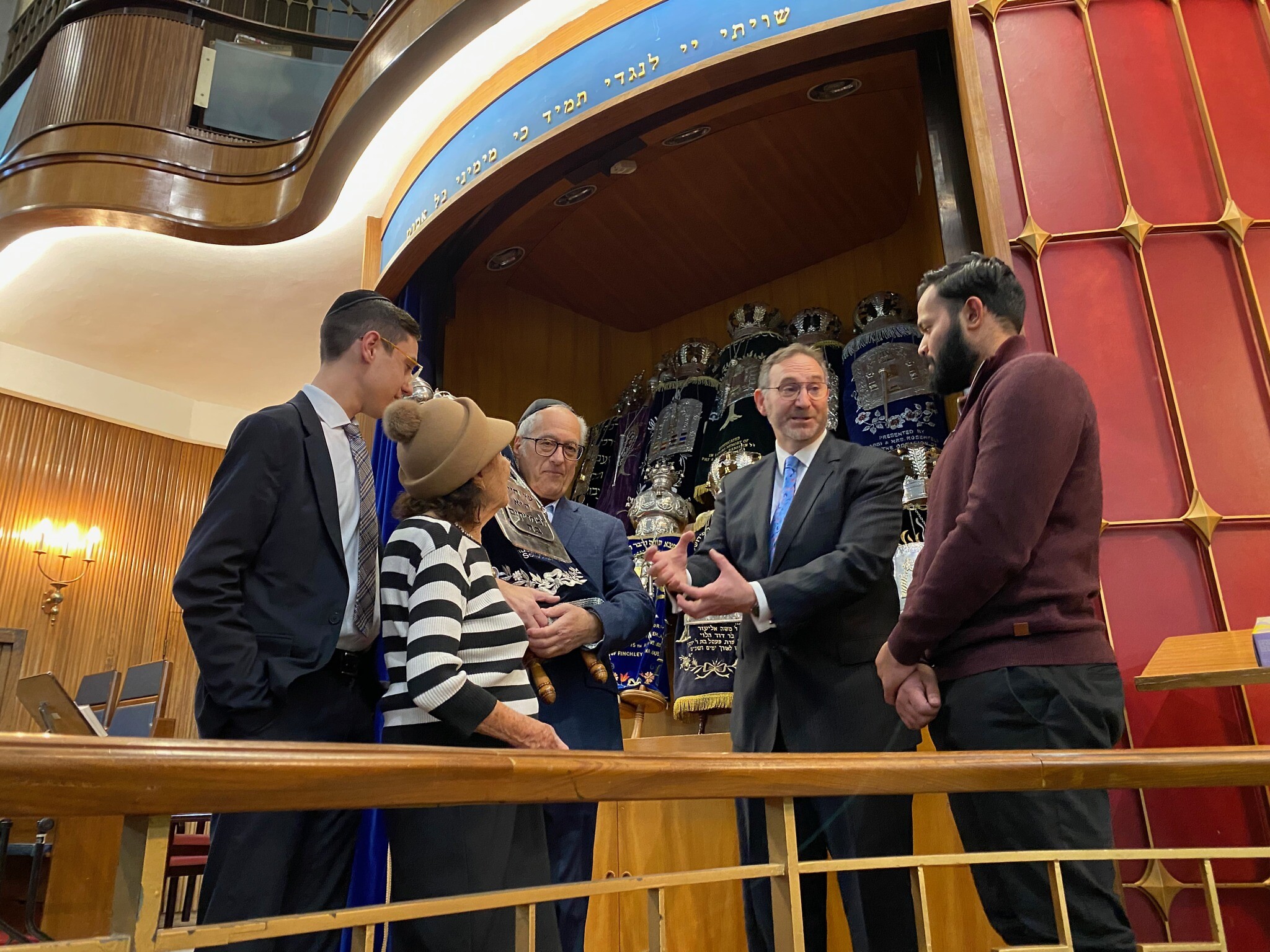 Azeem being shown the ark at Kinloss

Earlier on Thursday he held meetings with a representative of the Community Security Trust and visited the Jewish museum where he met Kindertransport refugee Ruth Barnett, and Steven Silverman from Campaign Against Antisemitism.

During the day, he learned about the meaning behind antisemitic tropes he had used in 2011, when he referred to a teammate as a “Jew”, when they reportedly didn’t want to spend money.

When asked how he didn’t realise the comments were offensive, he said “clearly, at the time I wasn’t really thinking straight and didn’t really know what I was saying. I messed up.” Azeem with Lily and Dov, and her Memoir

He said he’d return to his local community and wants to “talk about the day and what I’ve learned. And the more people that  hear it from me, then hopefully they’ll go on and speak about it as well.”

Asked whether antisemitic tropes he used were widespread, he said he didn’t think he’d heard it while growing up. “I wouldn’t say I spent a lot of time in within my own community. So it’s not something I would say I heard a lot of, I honestly don’t know where it came from. And obviously, there’s clearly a deeper meaning, a historical meaning, which I’ve been told about today, which I wasn’t aware of.”

Speaking to Jewish News, he said the day had “been incredible.”

“Just sitting down with Jewish people, and listening to them, and their experiences.” 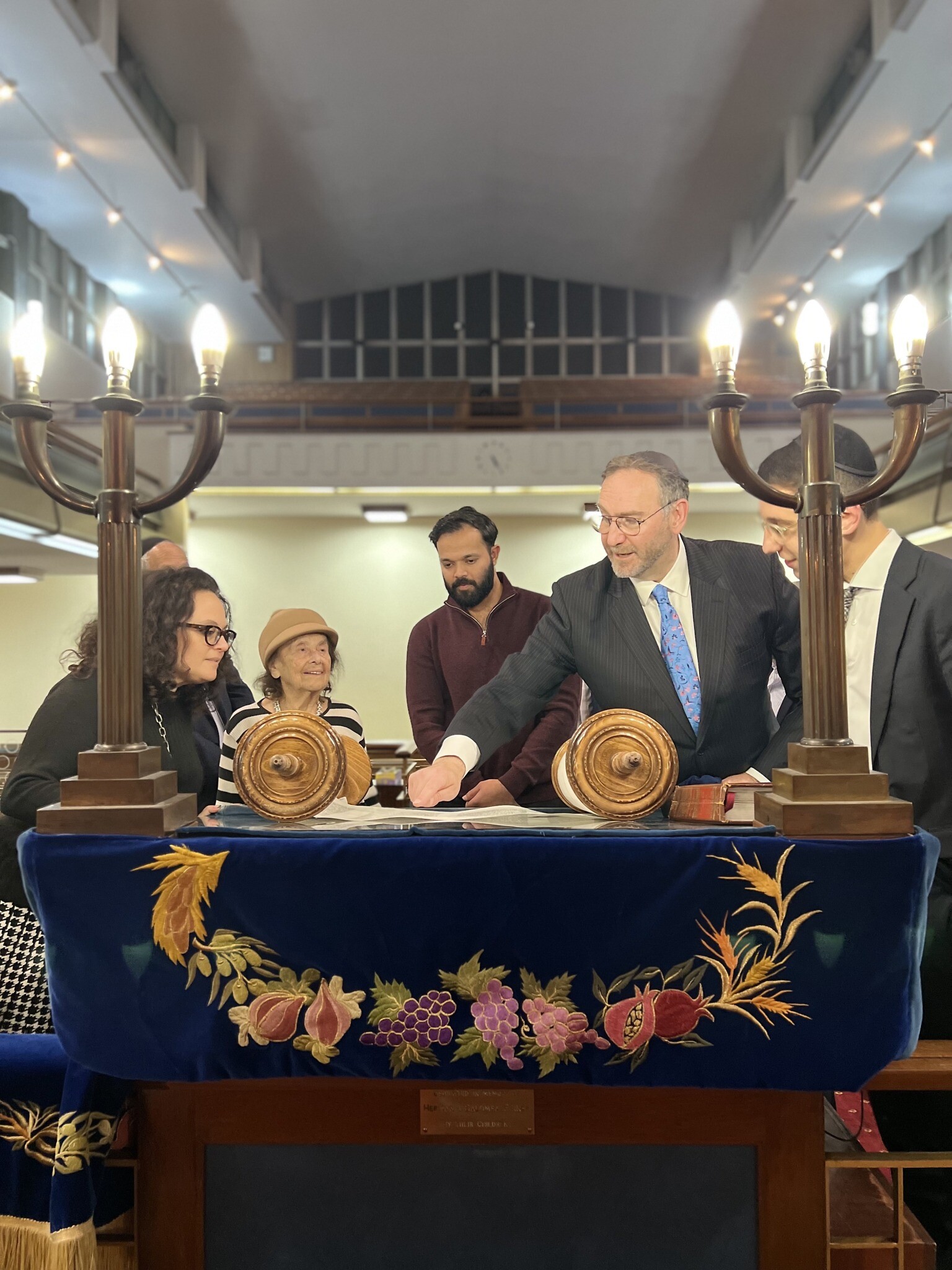 Azeem looking inside a sefer Torah with Rabbi Lawrence

When asked what he’d learned about the community and antisemitism, he said “there’s a lot of similarities.”

Rafiq said he’d been “lucky enough that the Jewish community has been absolutely brilliant from the minute it became evident about the mistakes I’ve made, they’ve been welcoming, open arms, from some leading figures, and some people I hope I’m going to stay and in touch with and spend more time just understanding.”

“Id like to actually go into the Leeds Jewish community as well and just meet some people there.” 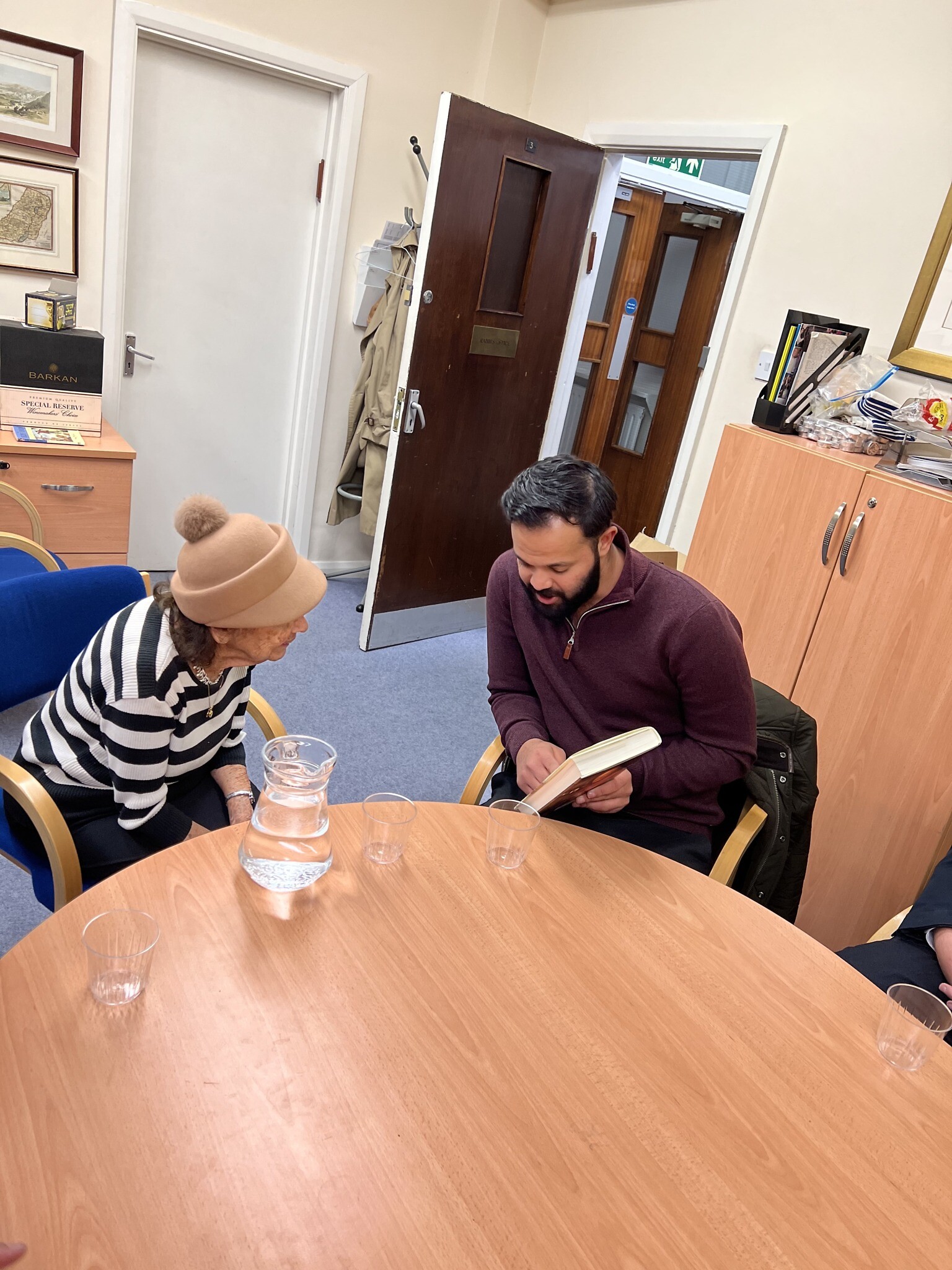 Azeem asking Lil about her book

Following his apology for his antisemitic remarks, both the Board of Deputies and CST welcomed his commitment to make amends. But he said “I wouldn’t say I’ve been surprised” by the support.

Reflecting the last year, in which he has raised the alarm about racism at his former county, he said “over the last 14 months, I’ve given the Jewish community as an example to my own community, saying that if this was a Jewish kid that was going through this, he wouldn’t be left so alone.

The Yorkshire-based former cricketer reiterated that he doesn’t “expect forgiveness. Hopefully my actions will just prove how sorry I am.”

Dave Rich of CST said: “Azeem contacted CST last week because he wanted to apologise directly for his past antisemitic comments, and because he wanted to learn more about antisemitism and the Jewish community. We felt it was right to meet him because his original apology was clear, unequivocal and he had taken responsibility for what he had done.

“We spoke openly and at length about the history of antisemitism, how it affects Jewish people today and the role that the Israeli-Palestinian conflict plays in modern antisemitism.

“I hope and expect that his engagement with the Jewish community will continue and that this experience means he will address antisemitism as part of his anti-racist work in the future.”