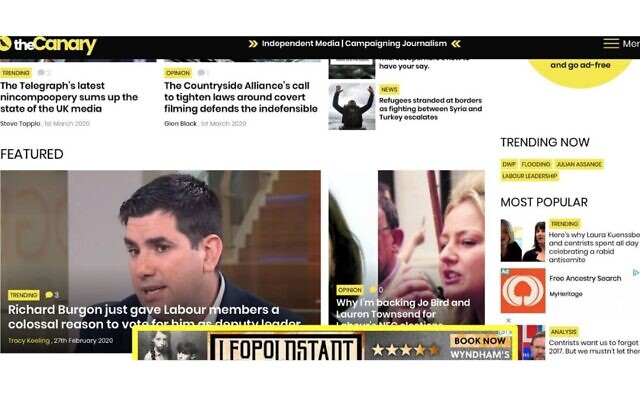 Campaigners targeting hyper-partisan websites by hitting their advertising revenue have persuaded the production of Leopoldstadt to boycott The Canary.

The production’s official Twitter account confirmed on Monday it had agreed to blacklist The Canary from their advertising preferences after an appeal from the group Stop Funding Fake News, backed by the Countdown presenter Rachel Riley and the stage and screen actress Tracy-Ann Oberman.

The group of anonymous activists said material published on The Canary had breached the International Holocaust Remembrance Alliance of antisemitism (IHRA).

Promoting a tweet by the campaign to her 650K followers, Riley described The Canary as a “hateful site” on Monday, while Oberman called it an “anti-Jewish propaganda machine” in a tweet.

Campaigners hailed Leopoldstadt as an “important story about the legacy of the Holocaust” – but warned it was being promoted on a media outlet “famous for denying Jewish experiences of antisemitism and promoting those accused of antisemitism.”

They pointed to an article published in 2016 drawing parallels between Israel and Nazi Germany – a comparison defined as antisemitic in the IHRA’s accompanying examples.

The column, written by the editor-in-chief Kerry-Anne Mendoza, claims it is “wholly legitimate, and indeed urgent, to make this comparison, and avoid repeating the horrors of the past”.

Stop Funding Fake News raised concerns about the website’s decision to give a platform to the online writer Steve Topple, who apologised in 2016 for publishing tweets he said were “disparaging to Jewish people and antisemitic.”

Topple, who has contributed over 1,500 articles to the outlet since joining, is according to his author description an “independent journalist, and political and social commentator.”

Tweets previously discovered on his timeline from 2014 and 2015 included suggestions Jews should be held responsible for the “growing Zionist cancer” and that members of the Royal Family are secretly Jewish.

According to The Canary, the website founded in 2015 was read by over 8.7 million people in the two months leading up to the December general election.

Stop Funding Fake News – which was inspired by the Sleeping Giants campaign in the US – regularly calls on brands to boycott offending publishers.

But brands can blacklist offending publishers by adding the web address to a dedicated section in their AdWords account.

Nancy Mendoza, director of communications and membership at The Canary, said: “as a Jewish co-founder of The Canary, I find the continued recycling of this smear campaign both personally offensive and transparently cynical.

“One key goal of our anti-racism work is to show that people can change their minds. Steve Topple did exactly that. He made antisemitic comments before learning more and apologising at length. Critically, Steve’s views are forever changed and he remains committed to fighting racism of any kind.

“The facts were the same when the likes of Riley and Oberman promoted this long-dead story in 2016, 2017, 2018, 2019 and today. That both continue to target a left-wing media outlet co-founded by Jewish people, and led by an LGBT woman of colour I believe speaks more to their values than ours.

“The fact this witch hunt has been forced to regurgitate the same long-settled story repeatedly is further evidence of its baselessness. We are proud that through our journalism, we tackle racism, bullying and all forms of bigotry on a daily basis – rather than simply weaponising it for political ends.”