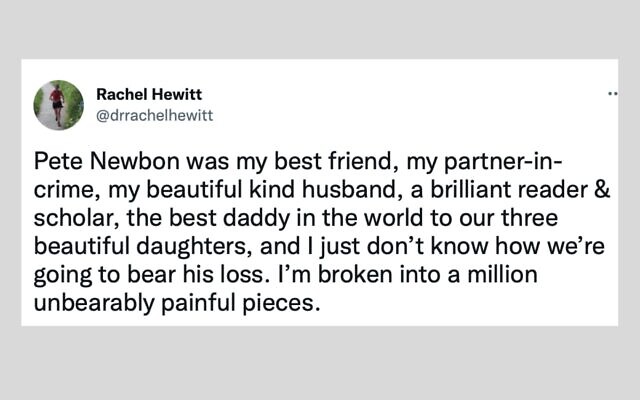 Huge numbers of tributes were paid this week to the academic Dr Pete Newbon, a director of the Labour Against Antisemitism activists group, whose sudden death was announced by his partner, Dr Rachel Hewitt.

On Monday, Dr Hewitt wrote: “Pete Newbon was my best friend, my partner-in-crime, my beautiful kind husband, a brilliant reader and scholar, the best daddy in the world to our three beautiful daughters, and I just don’t know how we’re going to bear his loss. I’m broken into a million unbearably painful pieces”.

Fiona Sharpe, spokesperson for LAAS, said the news of Dr Newbon’s death had come as a “complete and devastating” shock to his many friends and colleagues. She told Jewish News that she had spoken to him as recently as last weekend — “and there was no intimation that there was anything wrong”.

In a statement from LAAS, Ms Sharpe said: “Words cannot express how sad we are all at his death. Pete was a generous, kind, and decent man who will be sorely missed by all who knew him. We extend our condolences and support to Pete’s family, whom he adored”.

Pete Newbon was my best friend, my partner-in-crime, my beautiful kind husband, a brilliant reader & scholar, the best daddy in the world to our three beautiful daughters, and I just don’t know how we’re going to bear his loss. I’m broken into a million unbearably painful pieces. pic.twitter.com/GDH2GJErnz

Dr Newbon, a lecturer in Romantic and Victorian literature at Northumbria University in Newcastle, is believed to have been in his late 30s and to have been brought up in the Leeds Jewish community. He was described as “happily besotted” with his children — a girl aged nine and younger twin daughters aged seven — and frequently posted pictures of his family on social media.

During the Corbyn years Dr Newbon’s political comments were often witty and incisive. But last year there was an unexpected row, after the academic tweeted a photoshopped picture of Corbyn reading to a group of schoolchildren from Michael Rosen’s renowned children’s book, “We’re All Going On A Bear Hunt”.

The image had been changed so that Corbyn appeared to be reading from the notorious anti-Jewish forgery, The Protocols of the Elders of Zion. Michael Rosen, a former children’s laureate who is himself Jewish, described this as “loathsome and antisemitic”. The ensuing row, with many attacks on Dr Newbon, saw Northumbria University investigating him for alleged antisemitism — a move described by the lecturer’s supporters as “an appalling travesty”.

Among those paying tribute to Dr Newbon was the QC Simon Myerson, who chairs the Leeds Jewish Representative Council. He wrote on Twitter: “Those who remorselessly bullied him on [Twitter] neither represent, nor I suspect understand, the love and friendship he inspired. His memory will be a blessing and an inspiration for people who do right and love peace”.

A GoFundMe campaign to support Dr Hewitt and the couple’s three children has been launched, and other friends are opening a book of memories to present to the family.

Fiona Sharpe told JN: “He never forgot that behind every [social media] account there was a human being. He was always level-headed and a complete gentleman. He wasn’t simply a colleague, he was a friend, and we will miss his humanity and his fairness”.