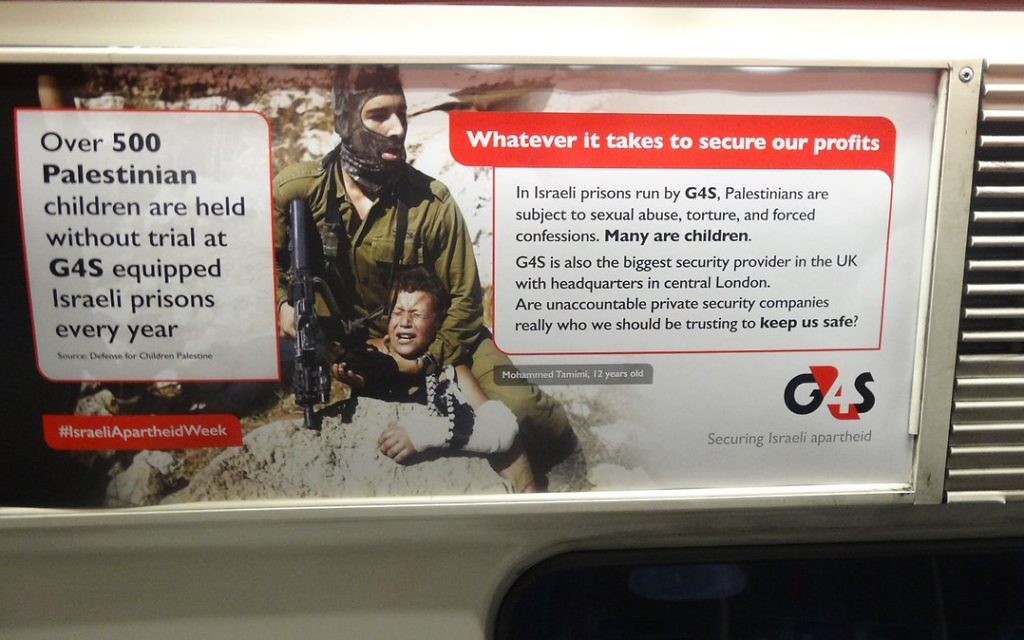 One of the posters that was tweeted

Two of the posters spotted on a tube train in London. (Source: Twitter)

Anti-Israel adverts have been plastered on trains across the London Underground in an “an act of vandalism” according to Transport for London, writes Justin Cohen.

Another  poster asks why BBC reporting is biased in favour of Israel, while a third targets security company G4S which works in prisons in the country – accusing it of “securing Israeli apartheid” and doing “whatever it takes to secure profits”.

Images on social media suggest it is part of a four-poster campaign by activists, whilst TFL have responded by saying they are not sanctioned.

A TfL spokesperson said: “These are not authorised adverts. It is fly posting and therefore an act of vandalism which we take extremely seriously.

“Our staff and contractors are working to immediately remove any found on our network.”

Another of the posters put up on the tube, this time attacking security firm G4S

Boris Johnson personally confirmed the images would be removed after being approached by Yesh Atid leader Yair Lapid, this morning.

Yair Lapid holding a poster as seen on the tube during a faction meeting at the Knesset (Source: Yesh Atid on Facebook)

Conservative London Assembly member and transport spokesman Richard Tracey said: “It is utterly deplorable that these offensive ‘adverts’ have been smeared across parts of the tube network by a small number of activists.

“Tracey urges Tfl to “do everything within its power” to the remove these “anti-Semitic posters and catch those responsible for distributing them.”

Labour Assembly Member for Barnet and Camden Andrew Dismore AM raised the issue with TfL senior management “as these notices are clearly against TfL’s advertising policy rules.”
“It appears they are cleverly designed flyposters, to fit TfL advertising frames in substitution for , or over the top of,  legitimate commercial adverts.
‘TfL have promised me they are removing them, though they have to find them first, as they are spread about the network.”

Calling the posters “racist and deeply insensitive propaganda” he calls for commuters to alert report the posters to TfL staff if spotted.

A London Jewish Forum spokesperson said: “These posters are awful smears that do nothing to contribute to peace and dialogue, placing significant strains on inter-community relations across London. They are an act of vandalism, seeking to undermine the UK’s relationship with Israel and designed to foster discomfort. We welcome Transport for London’s commitment to quickly remove them.”

The Zionist Federation sent a letter to TFL, criticising the “grotesque, reductionist, and inaccurate portrayals of the issue” which would impact community tensions.

The letter also welcomes the ‘swift action’ to remove the posters, but asks what action will be taken to “make sure that such a distressing episode is not repeated.”

A spokesperson from security firm G4S told Jewish News: “‘We understand that Transport for London are now removing these posters, which in G4S’s case inaccurately stated that we run prisons in Israel.’

A tweet from the account of Brighton BDS said: “over 500 London tube trains plastered with posters for the 4 million passengers to read tomorrow #Israelapartheidweek.

It added: “Big shout out to London activists who’ve been busy for #Israelapartheidweek.”