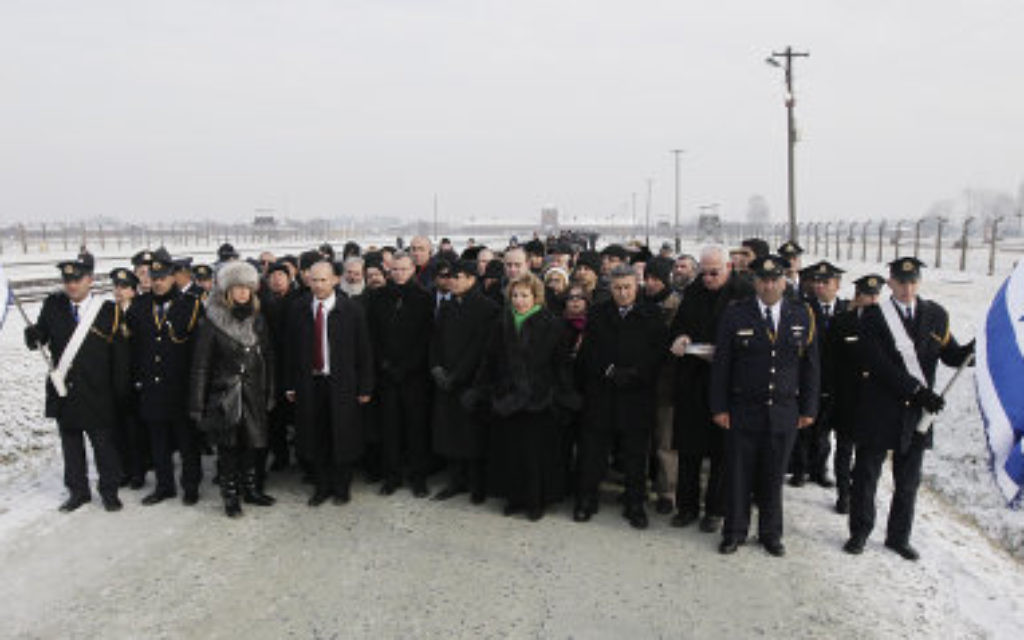 Members of Israeli parliament, the Knesset, attend a ceremony to mark the 69th anniversary of the liberation of Auschwitz Nazi death camp's in Oswiecim, Poland, on Monday.

British peers and parliamentarians this week urged Poland to “provide some degree of remedy for the injustices of the past” by allowing Holocaust survivors and their families to claim for confiscated property in the east European state.

In a hard-hitting letter to Polish Prime Minister Donald Tusk, signatories blasted his government’s record on restitution, saying: “Poland stands out in its failure to fulfil, or even recognise, its responsibility to victims.”

It comes ahead of today’s debate in the House of Lords and as Britain takes the chair of the International Holocaust Remembrance Alliance (IHRA).

“We’re asking the Foreign and Commonwealth Office to use their leverage this year to make a special push to get the job done,” said Baroness Deech QC, who met ministers together with representatives from the Board of Deputies this week.

Deech explained that there was a focus on Poland because this was where the biggest loss of property occurred and because Poland is “the only country in the new Europe to have failed to make even a gesture of restitution through legislation, so it is the biggest problem and the least acceptable solution”.

Since 1990, successive Polish governments have introduced draft laws, but in most cases these never get voted on by parliament. When Tusk took power in 2007, he promised to do so once and for all, but in 2012 officials changed their tune, insisting a bill was no longer needed and that claimants could instead pursue their claims through the Polish legal system. “This is a most unfortunate position,” says Deech.

“They expect you to produce title deeds for a start. Who has title deeds, when their parents or grandparents were lost in the Holocaust? Those who do try just get batted between Polish and European courts. It’s completely unrealistic.”

Past efforts from British, American and European representatives have so far not persuaded Poland to change its stance, and time is running out for the 90,000 survivors still alive today who had property in Poland.

“They have a feeling that Poland is just waiting for them to die out,” said Deech. “Every time we start a campaign to get Poland to respond, it turns quite nasty.”

Michael Newman, chief executive of the Association of Jewish Refugees, said: “The debate is an opportunity to highlight the urgent need for countries like Poland to facilitate the restitution of Holocaust-era assets. We welcome the government’s strong interest in addressing restitution as one of a number of post-Holocaust issues during its chairmanship of the IHRA.”