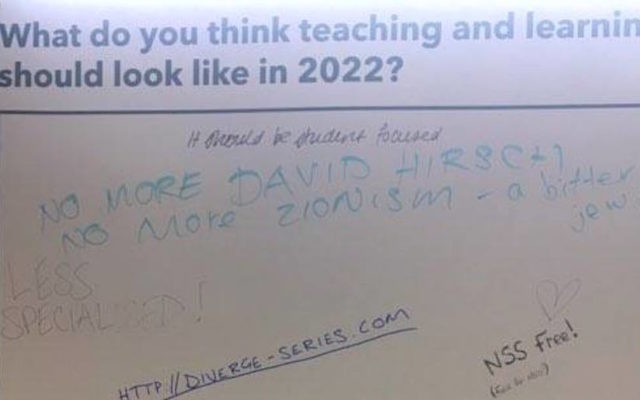 A Jewish academic at Goldsmiths University in London has described facing unprecedented hostility after the idea of his exclusion for being a Zionist was included on a student suggestions board, on which he was also called “a bitter Jew”.

David Hirsh, a lecturer in sociology at Goldsmiths College, part of the University of London, came across the hateful message on Monday, penned to a noticeboard asking students: “What do you think teaching and learning should look like in 2022?”

In amongst other suggestions, someone had written: “No more David Hirsch, no more Zionism – a bitter Jew.”

Hirsh has taken a leading role in opposing academic boycotts of Israel, and recently drew fire for criticising Jeremy Corbyn as being “intentionally ambivalent” in his handling of incidents of anti-Semitic comments in left-wing politics.

On Tuesday, Hirsh reacted to the abuse, saying: “Some academics teach that Zionism is racism and that Israeli academics should be excluded from our campuses. This person defined me as a ‘Zionist’ and therefore a racist, so thought it appropriate to demand that I be excluded from Goldsmiths. In this case a focus on Jewishness followed quickly from hostility to Israel.”

He added: “I have never experienced this kind of hostility from any student that I have taught and I have often felt humbled that students from all backgrounds and political traditions have been happy to learn with me.”

A spokesperson for Goldsmiths, University of London said: “We condemn this action – this is an unacceptable attack on a member of Goldsmiths staff.

“The university is investigating this incident on the grounds of antisemitism and is making every effort to identify those responsible and begin a disciplinary procedure.

“We are rightly proud of our inclusive community on campus – the university has zero tolerance to prejudice of any kind.

“Everyone has a right to feel safe and supported at Goldsmiths and beyond and we will work with students and staff to ensure this is understood by all within our community.”

"No more David Hirsch No more Zionism – a bitter Jew" – somebody's suggestion for our teaching. Antizionism into antisemitism in ten words. pic.twitter.com/hIIWHvsb43