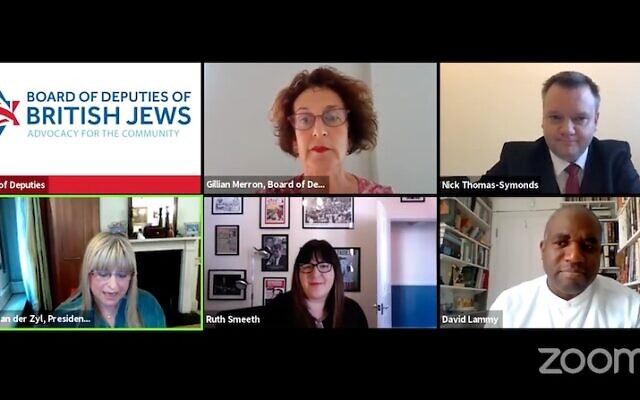 The Board of Deputies virtual Labour conference event (Screenshot from YouTube)

The Board of Deputies’ event was joined by Shadow Home Secretary Nick Thomas-Symonds and Shadow Justice Secretary David Lammy. Shadow Education Secretary Kate Green, together with Jess Phillips, Shadow Minister for Domestic Violence and Safeguarding, took part in a fringe event jointly held by the Holocaust Educational Trust and the Antisemitism Policy Trust.

In both discussions the issue of how to regulate social media companies, and what would make them comply with new and more stringent regulation, was considered. Jess Phillips was blunt: any fines imposed on the companies, she said, had to be “huge”, and any levy raised to fund an independent regulator to monitor online hatred had to be substantial.

Nick Thomas-Symonds said that Labour would support new legislation to regulate social media companies. He said: “I have lost patience with the idea that the companies can self-regulate. The platforms have been slow to act. The time has come where there has to be regulation.”

He added: “We have told the government that we will work with it constructively to get online harms legislation right. There has to be a formal duty of care, independently regulated.” The government is currently considering the OnLine Harms Bill but it is not expected to be in front of Parliament for final approval until 2021.

Watch the video of the meeting held by the Board of Deputies of British Jews, here:

Both Jess Phillips and the former Labour MP Ruth Smeeth, who is now chief executive of Index on Censorship, spoke of the online abuse to which they had been subjected — and in  both debates it was acknowledged that there was a high and unacceptable level of misogyny. Ruth Smeeth, who lost her seat at the last election, said: “I haven’t been able to wear my Apple watch at all since this time. When you get death threats coming through on your wrist, that is overwhelming.”

David Lammy described going to Wolverhampton for the trial of a man accused of sending him and other MPs death threats online. The man, he said, “had been seduced by the extremism that he was coming across in an everyday way, dragging him in to the cesspool silos of hate”.

Danny Stone, chief executive of the Antisemitism Policy Trust, spoke of the “hit and miss” arrangements of too many of the social media companies, which too often led to “rabbi-holes of hate”.

Kate Green stressed the importance of education against online hatred and denial, urging that it should start as early as possible. If it were to wait until people were on university campuses, she said, it was almost certainly too late. And she urged people to be “vociferous in speaking out” whenever possible.

Jess Phillips, acknowledging that she would still like to see a world where people could make jokes at her expense, offered an almost fail-safe litmus test for what appeared online: “We should have a button on Twitter which asks, would your mum like it?”