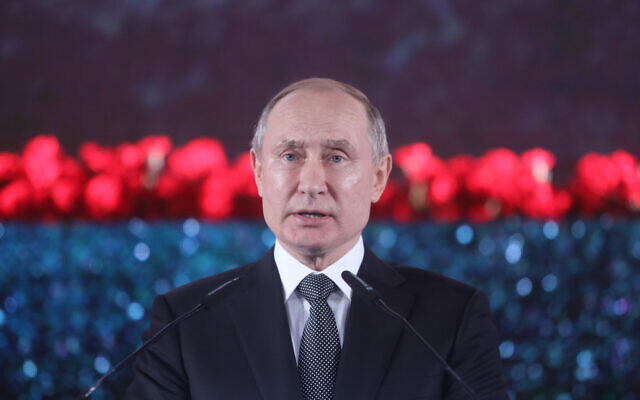 Russian President Vladimir Putin has apologised to Israel after his foreign minister claimed in an interview last weekend that Adolf Hitler had Jewish heritage.

Sergei Lavrov came under fire from Jewish leaders around the world after his claim about the Nazi leader, which he made while speaking to Italian television.

Israel’s prime minister Naftali Bennett said he discussed the remark in a phone call with Putin on Thursday, and that he had accepted the Russian president’s apology.

A statement from Bennett’s office said: “The Prime Minister accepted President Putin’s apology for Lavrov’s remarks and thanked him for clarifying his attitude towards the Jewish people and the memory of the Holocaust.”

The Kremlin did not immediately release a readout of the call in English, although a statement in Russian did not refer to what Lavrov had said.

His remarks came after he was asked by Italy’s TgCom24 network how Ukraine’s Jewish president Volodymyr Zelensky could be overseeing a Nazi regime, as the Kremlin has repeatedly claimed without evidence.

Lavrov responded: “So what if Zelensky is Jewish?

“The fact does not negate the Nazi elements in Ukraine. I believe that Hitler also had Jewish blood.

“It means absolutely nothing. The wise Jewish people said that the most ardent antisemites are usually Jews.”

The comment triggered Israel’s harshest criticism of Russia since the outbreak of war in Ukraine, with President Isaac Herzog saying Lavrov was spreading “lies, terrible lies, which smell of antisemitism”.

“I expect him to retract his words and apologise,” he told Haaretz.

Yad Vashem, the Holocaust memorial in Jerusalem, said they were “absurd, delusional, dangerous and deserving of condemnation”, while Foreign Minister Yair Lapid branded them an “unforgivable and scandalous and a horrible historical error.”

There was even rare criticism from within Lavrov’s own country, with the Russian Chief Rabbi Berel Lazar telling the Jewish Telegraphic Agency that Lavrov’s remarks were “shocking”.

He said: “I do not consider myself entitled to give advice to the head of Russian diplomacy — but it would be nice if he apologised to the Jews and simply admitted that he was mistaken.

“I think it would then be possible to consider the incident settled and turn the page.”

In Britain, the Board of Deputies president Marie van der Zyl called the remarks “a hideous falsehood” while Chief Rabbi Michael Schudrich from the Conference of European Rabbis said they had “rightly been labelled as antisemitic”.

The European Jewish Congress — whose Russian-born president Moshe Kantor resigned last month after being named in UK sanctions — said they should be retracted because they risked “very serious consequences for Jews in Russia and elsewhere”.

Conspiracy theories have arisen around the Nazi leader’s Jewish heritage because it is not clear who his paternal grandfather was, but no evidence has ever been produced to support the speculation.