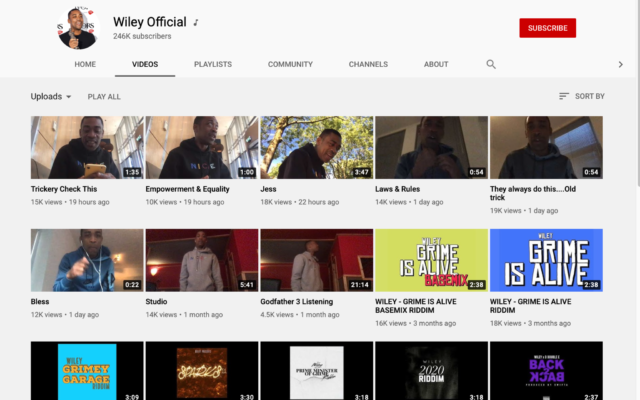 The musician, whose real name is Richard Cowie, was widely condemned for the anti-Jewish posts on Twitter starting on Friday, including one Instagram video where he said “crawl out from under your little rocks and defend your Jewish privilege”.

After being banned from the three social media giants, he has continued uploading videos, one of which has already been taken down for violating YouTube’s hate speech policies.

The social media platform confirmed it has temporarily suspended monetisation on all his videos.

“We’ve worked hard to develop responsible and universal community guidelines that make clear what content is unacceptable on our platform and we enforce our policies consistently, and regardless of viewpoint.”

Marie van der Zyl, president of the Board of Deputies of British Jews, called on YouTube to delete his account entirely after meeting with representatives of the site on Wednesday.

She said: “The Board of Deputies made it clear that we believed Wiley would soon be using their platform to spread the same anti-Semitic messages he has been spreading on other media platforms. As predicted, Wiley has begun doing so.

YouTube has said it will look at the broader context of Wiley’s videos and his behaviour off the platform when considering further action.

It comes as campaigners put pressure on the government to remove Wiley’s MBE — which he said he would be willing to give up as he “never wanted it”.

The musician insisted he is not racist as he apologised for “generalising” in his tweets — however, the Campaign Against Antisemitism is among the voices calling for Wiley’s MBE to be forfeited.

A petition calling for him to be stripped of his MBE has been signed by 29,000 people, with Change.org, the site on which it’s hosted, backing the move.

Executive Director of Change.org UK, Kajal Odedra, told Jewish News: “As soon as the news broke about Wiley’s antisemitic comments, dozens of people started petitions on Change.org for his MBE to be removed. Since then, over 27,000 people have signed Sophie’s petition, which is a clear sign of the strength of feeling about this issue.

The Cabinet Office should be paying close attention to the fact Twitter, Facebook and Instagram have all banned Wiley this week, and listen to the thousands of people who want his MBE removed.”