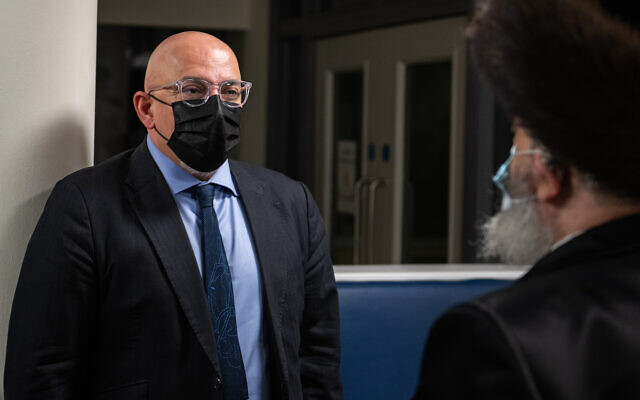 Education Secretary Nadhim Zahawi has confirmed A Level and GCSE exams in England next summer will be adapted to ensure fairness and to help students affected by disruption caused by the pandemic reach their potential.

The Secretary of State also confirmed that on February 7, teachers would also receive information on specific topics likely to be covered in this year’s examinations.

Zahawi told Jewish News he had been working with the exams watchdog Ofqual on “two important steps” to recognise this disruption to millions of students’ education as they studied for exams.

He was speaking immediately after hosting a summit aimed at preventing the rise of antisemitism across UK university campuses.

“Those taking A-Levels or GCSEs this summer will go to the mean between teacher assessment and pre-pandemic ,” he said.

“We’ve put fairness at the heart of our approach and listened to pupils, parents and teachers.”

With exams set to return in the summer, he confirmed Ofqual has set out its approach to grading, following the last two years which saw an overall higher proportion of students receiving top grades compared to pre-pandemic years.

This summer’s exams will be a transition year to reflect the recovery period and grade boundaries will be set by exam boards reflecting a midway point between the years 2021 and 2019.

“The second really important thing is that on February 7th, Ofqual will send out the additional information to students through their teachers to be able to focus on what they are going to be examined on – to give them that additional information we think is only fair as we recognise the extent of the disruption to their education,” the Cabinet Minister said.

Across Jewish and secular schools there had been widespread concern that uncertainty around the way in which grades would be allocated to students taking A Levels and GCSEs this year was having a negative impact on the mental health of thousands of teenagers.

The Department of Education said the plans recognise the disruption caused to this year group’s education as a result of the pandemic, while balancing the need to return to exams as the fairest possible form of assessment.

Zahawi said he wished to thank students for “all their hard work” under difficult and unpredictable circumstances.

Headteachers had urged the government to review the “fairness” of this year’s A-Level and GCSE examinations, saying much of the expected guidance was based around the impact of Covid 19 before the latest Omicron variant had emerged.

Zahawi spoke to Jewish News immediately after hosting a summit aimed at preventing the rise of antisemitism across UK university campuses.

Zahawi said a visit to Auschwitz last November had convinced him of the need to hold the summit on Wednesday.

“It was reminder of why antisemitism in all its forms must never be tolerated,” said the Education Secretary. “I said at summit, education is the vaccine against antisemitism.

“We need to learn and see the consequence of what antisemitism and extremism can have on the world.”

He said last year “more” university’s had been asked to adopt the IHRA definition of antisemitism. “I mentioned at the summit this was the first step in terms of what university leadership needs to do so antisemitism is not tolerated on campus.”

Zahawi said the government had “done well” in trebling the number of universities who have now adopted the definition, with 95 institutions now taking it up.

He said research shown to him by the Union of Jewish Students (UJS) had shown how the situation had improved – but he now wanted to work to ensure “all universities signed up to it.”

Zahawi said the definition was only “step one” and their needed to be a “sector wide effort” to eradicate antisemitism.

He said he had been shown examples of the abuse dished out to a minority of Jewish students – including one example of a student who was sent a doll in concentration style striped pyjamas as a “joke” present.

Zahawi accepted that debate around Israel was at the centre of many problems around anti-Jewish racism. “We shouldn’t be tolerating this use of the state of Israel – the talk of being anti-Zionist as a way of being antisemitic.

“That was very much part of my opening talk at the summit.”

The Cabinet minister dismissed suggestions he was concentrating on antisemitism on campuses rather than other forms of racism.

He said: “This isn’t a trade off – there should be no place for any form of racism, Islamophobia or anti-Black racism or any other form of racism in our educational system. I think it is important that message is delivered.”