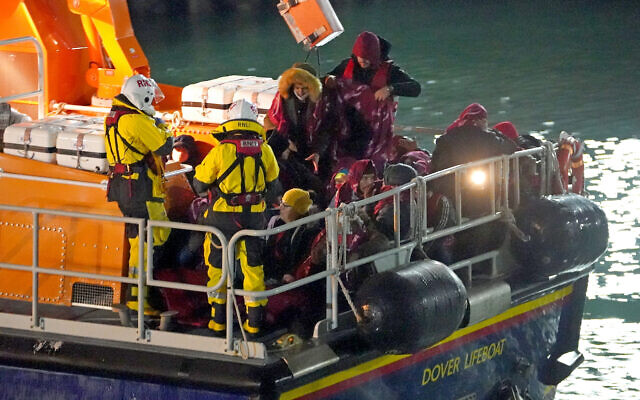 A group of people thought to be migrants are brought in to Dover, Kent, by the RNLI, following a small boat incident in the Channel after 27 people died yesterday in the worst-recorded migrant tragedy in the Channel. Picture date: Thursday November 25, 2021.

A group of 28 UK rabbis have written to the Home Secretary expressing the “deep concern and dismay” they say is felt by many in the Jewish community over the government’s asylum bill proposals.

The United Synagogue’s Rabbi David Mason and Rabbi Jonathan Wittenberg, the Senior Rabbi of Masorti Judaism, were amongst the signatories of the letter coordinated by the Jewish Council for Racial Equality (JCORE), which was sent to Priti Patel on Tuesday.

It was timed to coincide with a debate in the Commons on amendments to the Nationality and Borders Bill’s proposals.

In their letter, the rabbis, who include Rabbi Rachel Benjamin, Rabbi Rebecca Birk, Rabbi Dr Barbara and Rabbi Warren Elf MBE, assert that the bill’s punitive measures, which would create a two-tier asylum system and restrict the rights of many refugees arriving outside of official routes, “strongly negate our Jewish values of justice and fairness.”

They also urge the Home Secretary to remove “deeply damaging plans” within the bill which leave open future options for offshore asylum processing, highlighting that Torah instructs us to welcome the stranger 36 times.

And they express profound concern that the bill “will do nothing to prevent asylum seekers from being forced into undertaking such dangerous journeys, and will merely result in further misery for those in need of sanctuary”.

While the rabbis state that they agree that the UK’s asylum system is in need of urgent reform, they call on the Home Secretary to do this in a “a compassionate, workable and forward thinking manner.”

Under tougher sentencing powers, migrants who overstay their visas could face four years in prison, the Home Secretary has said.

At present the maximum punishment for this offence is six months. The Home Office has said the most serious cases would be targeted under the plan.

And they also say the measures will make it easier to deport those found guilty of overstaying. Any foreign national offender sentenced for over a year can be deported.

Compelling the Home Secretary to scrap the bill’s cruel plans, the rabbis instead call for the government to immediately expand and open safe routes for refugees, to ensure that the preventable, tragic deaths of 27 people in the Channel last month are never repeated.