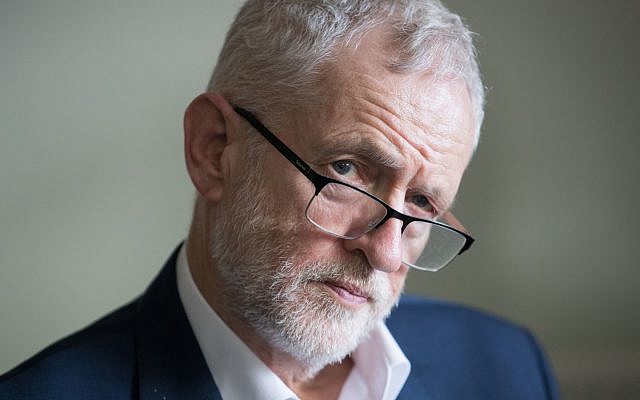 Jeremy Corbyn is being urged to by some close allies to quit Labour and set up his own political party.

Supporters – reportedly including his wife Laura Alvarez – are encouraging the former Labour leader to register his Peace and Justice Project as an official political party.

But others remain totally against such a move, with one Corbyn loyalist telling Jewish News the exit plan was “simply foolish.”

Those in favour of the move believe other Labour MPs and councillors would be ready to quit the party and align themselves with a new Corbyn-led initiative.

Sir Keir Starmer has made it clear that Corbyn cannot return as a Labour MP unless he apologies for his claim that antisemitism allegations within Labour were “dramatically overstated for political reasons”.

The prospect of Corbyn issuing such an apology remains remote – leaving it likely that he would have to stand as an independent candidate at the next election.

Jewish News understands that some in his circle are urging him to now prepare for this situation by make the Peace and Justice Project a registered political party.

Some are encouraging Corbyn to hold off making this move until after the local government elections in May.

The hope is pro-Corbyn council candidates that have been elected in May can then announce they are leaving to join the new Peace and Justice party in a snub to the current leader.

But other allies, including activists within his Islington North local party are against breaking the link with Labour.

Former shadow chancellor John McDonnell is amongst those said to oppose leaving Labour.

Charlotte Nichols, the Warrington North MP, tweeted on Monday that she did “not believe a single member of the PLP” would leave the party to join Corbyn.

I don't believe a single member of the PLP will leave to join him even in the very unlikely event there's actually any truth behind this, but I firmly believe anyone defects from their party mid-term (whoever it's to) should call a by-election accordingly. https://t.co/cnHRBgah2A

Corbyn’s own spokesperson said he “wants to see a Labour Party and Government that is serious about shifting wealth and power from the few to the many”.

Sources close to leader Starmer are said to be “relaxed” about the prospect of fielding a Labour candidate against Corbyn in Islington North at the next election if he does not issue an apology to the Jewish community.

While the former leader enjoys a 26, 000 majority in the seat, many voters in Islington North remain fiercely loyal to Labour.

While Corbyn supporters retain control of key posts in the local party, when asked to select their choice of new leader most members backed Starmer.

On Sunday, it emerged that former MP Mary Creagh, who lives in the constituency, had been spoken of as a possible candidate to stand for Labour there at the next election.

Creagh said she had “no plans” to stand, but did not rule herself out. Labour’s NEC have yet to discuss the Islington North issue as Starmer has reiterated that the ball is still in Corbyn’s court over issuing an apology.

Corbyn had set up his Peace and Justice Project last year as a ” hub for discussion and action, building solidarity and hope for a more decent world.”