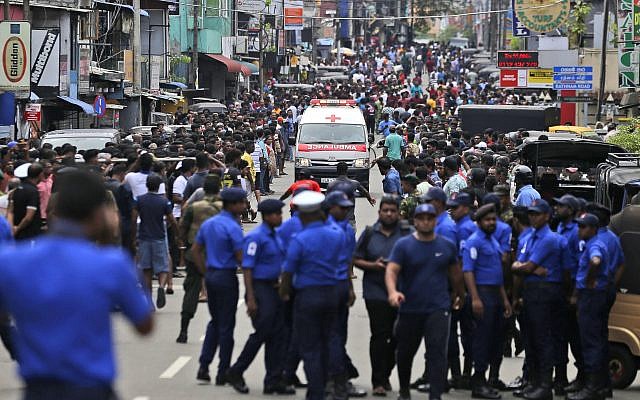 British Jewish leaders have joined international figures in condemning the terror attacks on Easter Sunday in Sri Lanka, which left more than 200 dead.

The death toll from the Sri Lanka Easter Sunday explosions now stands above 320 with 500 people injured, according to a police spokesperson.

Hours later, two more explosions occurred – a blast at a guesthouse in Dehiwala killed two and an eighth incident occurred in Dematagoda on the outskirts of Colombo.

At least nine foreign nationals are thought to be among the dead.

The country’s defence minister Ruwan Wijewardene described the bombings as a terrorist attack by religious extremists and said seven suspects had been arrested, though there was no immediate claim of responsibility. Islamic State groups have since claimed they committed the atrocity.

British Jewish leaders reacted with horror, with Board of Deputies president Marie van der Zyl tweeting: “We condemn the shocking bomb attacks on those murdered innocently at prayer in churches in Sri Lanka for Easter morning and in other hotels.

“All our sympathies are with the victims and their families at this terrible time.”

Chief Rabbi Ephraim Mirvis said on Monday, after the first two days of Pesach: “I have emerged from the peace of our Passover festival to learn of the horrific Easter Sunday massacre, targeting Christians across Sri Lanka.

“The sheer scale of the violence places it among the most inhuman acts of mass murder in living memory and our hearts go out to the countless people mourning the loss of loved ones. We grieve alongside you. This unspeakable crime must shine a light on the despicable persecution of Christians worldwide and catalyse us to act in their defence”.

I have emerged from the peace of our Passover festival to learn of the horrific Easter Sunday massacre, targeting Christians across Sri Lanka. The sheer scale of the violence places it among the most inhuman acts of mass murder in living memory… 1/2

Senior Reform rabbi Laura Janner-Klausner tweeted: “Horrified by news of terror attacks on churches in Sri Lanka on such a holy day for Christians. Jewish communities stand in solidarity with our Christian friends in Sri Lanka terror attack rejecting hatred and violence wherever it occurs.”

Rabbi Danny Rich, Senior Rabbi of Liberal Judaism said: “Attacks on a synagogue in Pittsburgh, mosques in Christchurch and churches in Sri Lanka are all from the same stable of religious intolerance, bigotry, terrorism and the inability to celebrate difference.”

“We must all rejoice in the differences of humanity, whether by race, faith, ethnic background or sexuality – all of which are part of the rich tapestry of the Divine creation.”

Prime Minister Theresa May paid tributes saying “no one should ever have to practise their faith in fear” while Foreign Secretary Jeremy Hunt said he was “deeply shocked and saddened” by the “horrifying blasts”. He added: “To target those gathered for worship on Easter Sunday is particularly wicked.”

Israel’s Foreign Ministry said it was not aware of any Israeli victims in the attacks, according to Times of Israel.

Israeli leaders condemned the attack, with president Reuven Rivlin saying they were a “despicable crime”.

“We are all children of God; an attack on one religion is an attack on us all. Israel sends condolences to the families of the victims and wishes for the recovery of the injured

Prime minister Benjamin Netanyahu expressed “on behalf of the citizens of Israel, deep shock over the murderous attacks against innocent civilians in Sri Lanka.

“Israel stands ready to assist the authorities in Sri Lanka at this difficult time. The entire world must unite in the battle against the scourge of terrorism.”

The Pope denounced the “cruel violence” of the Easter Sunday attacks and said he was praying for all those who are suffering from the bloodshed.