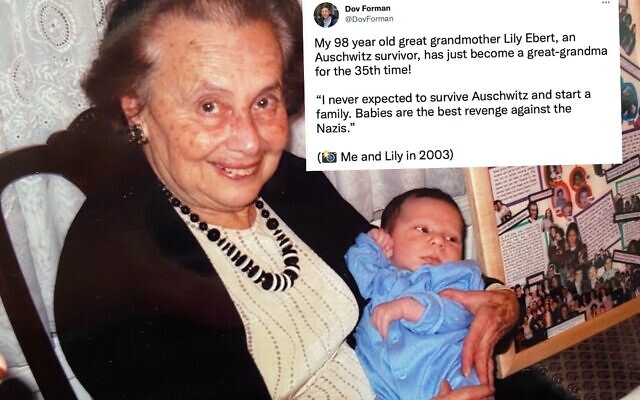 A Holocaust survivor who spent four months at Auschwitz has celebrated becoming a great-grandmother for the 35th time.

Lily Ebert, 98, was liberated by American soldiers in April 1945 when she was 20 and, some 77 years later, says babies are the “best revenge against the Nazis”.

“For anybody to achieve this – to be a great-grandmother – is something special, but how much more for me as a Holocaust survivor… it is very special,” Ms Ebert, who grew up in Hungary, told the PA news agency after her youngest grandchild welcomed a newborn earlier in January.

“I never thought I would achieve this. I had to survive first of all and then to achieve this age… (the Nazis) wanted to kill us and we showed (them) that they could not.”

After being freed, Ms Ebert spent a year in Switzerland before moving to Palestine-occupied Israel in 1946.

She migrated to the UK in 1967 with her husband, Samuel, and began a life of educating the world about the horrors of the Holocaust.

“She’s dedicated her whole life to educating others about the Holocaust,” one of her great-grandsons, Dov Forman, explained.

“She would go to different schools, workplaces, organisations, with other survivors … and she would share her testimony,” Dov Forman said.

“She also was a founding member of the Holocaust Survivor Centre in the UK.”

Ms Ebert “promised” herself she would tell her story.

“I promised myself: as long as I am here, I will tell my story for the future generations.”

Mr Forman, 18, praised his great-grandmother in a tweet which has accrued more than 120,000 likes.

My 98 year old great grandmother Lily Ebert, an Auschwitz survivor, has just become a great-grandma for the 35th time!

“I never expected to survive Auschwitz and start a family. Babies are the best revenge against the Nazis.”

“My 98 year old great grandmother Lily Ebert, an Auschwitz survivor, has just become a great-grandma for the 35th time,” he wrote.

The A-level student is used to media attention – his TikTok account for Ms Ebert and her stories has a following of more than 1.6 million.

He has even co-authored a book with Ms Ebert titled Lily’s Promise, which tells of the life she has built for herself.

“We’re just trying to tell her story to as many people as possible, both on social media and via our book,” Mr Forman said.

“I could sit here for a whole day and explain to you how much I’ve learned from her… she really is the queen of the family.

“We’re just an incredibly tight family and Lily sits at the top of that, and she just inspires us every day.”