Boris Johnson has insisted Israel has the right to defend itself against Iran “for the sake of peace” as Yair Lapid issued a personal plea for the world to stand against all attempts by terrorists to “kill my children”.

The pair were the guest speakers at Conservative Friends of Israel’s annual lunch, which was attended by more than 200 parliamentarians and at least eight cabinet ministers.

“It’s for the sake of peace that the UK defends Israel’s right to defend itself without equivocation against any hostile states like Iran,” the prime minister told the event.

Expressing his hopes that diplomacy would work when international powers resume talks with Tehran this week, he insisted that the country’s wider “behaviour” in the region must also change. The address came during the first two of a trip by Lapid to London and Paris to push the two countries to take a hardline at the nuclear talks.

Declaring that the UK-Israel relationship is growing “stronger and stronger” following the announcement this morning of a 10-year tech and security pact, the prime minister revealed that discussions on an upgraded post-Brexit trade deal would kick-off early next year and announced plans for a bilateral innovation summit in London in March.

In a speech laden with quips that had the audience in stitches at times, he recalled his time as a teenager on kibbutz, admitting to “my fellow kibbutzniks” that he had initially been sceptical about such a brand of “socialism”.

In the presence of the ambassadors of the UAE, Bahrain and Jordan, he hailed the Abraham Accords as “the beginning of a new chapter for the region” and said he had been “inspired” by the recent green water deal involving Jordan and the Jewish state. Hailing both Israel’s and the UK as tech “superpowers”, the PM also suggested the pair were ahead of the world in the vaccine rollout because of a shared belief in “the miracles of science”.

Johnson – who along with Lapid was presented with a menorah by CFI honorary chair Lord Polak -assured those gathered that “you can certainly on this government” in fighting antisemitism at home and abroad following the full proscription of Hamas last week. He said he “deplores” the treatment faced by Israeli Ambassador Tzipi Hotovely at LSE and “abhors” the online and offline abuse directed at Jewish students.

Making a powerful and personal case to stop Iran gaining the bomb, Lapid spoke of Britain and Israel’s common history in fighting “evil” and recalled how even in the ghettos of the Second World War, inmates would cling on to BBC radio as “the voice of freedom”. The world, he said, still looked to this country today “when religious fanatics push to get their agenda on nuclear weapons.

“We live in a world where many people and countries in the enlightened West have decided that the use of force is always wrong. That no one has the right to take up arms in defence of a principle. This represents ideological laziness. There is such a thing as good and evil.

“We have the right to defend ourselves. Our children will not grow up in shelters under ticket fire – something the British understand.”

He said the Iranian president speaks of always having defended human rights and the PFLP claim to be freedom fighters – assuming the world will “freeze” in the face of such rhetoric. “Ww must prove them wrong,” he told the gathering including Liz Truss, Priti Patel, Oliver Dowden and Alok Sharma. “Not all ideas are equally deserving of respect.

“If someone tells us – as the Iranians, Hamas and Hezbollah do – that it is ok to kill my children because their distorted interpretation of Islam claims that it is ok to kill Jewish children, they must know it is not going to happen. We are not going to get into a theological, or ideological, argument with them. We are going to defend ourselves from their evil. The lesson we learned from listening to the radio in the ghetto hasn’t been forgotten.” 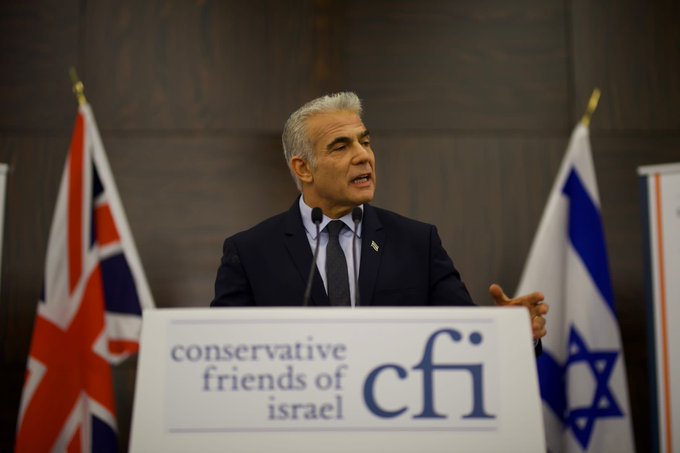 The foreign minister recalled reading Boris Johnson’s biography of Winston Churchill during the long night when Israel finally passed a budget a few weeks ago. At one point, he turned to Naftali Bennett to point out a quote from the late historian Sir Martin Gilbert about how he had admired Jews and been wedded to Zionism. Lapid said: “That connection between us exists to this day. It is not a symbolic connection, but a deep, practical friendship between political and security partners, who see eye-to-eye on most of the geopolitical issues that preoccupy our world.”

The PM and FM first met 17 years ago during a CFI trip to Israel – with Johnson joking about a night of “dancing on the tables” in Tel Aviv. Polak, revealing a photo of the pair from that night, quipped it was the most acceptable image that could be found.

On a more serious note, he recalled saying after the full proscription of Hezbollah that Hamas would be next. “Next, the Iranian Revllutionary Guards,” he told the event.

Johnson applauded the work of CFI -led by James Gurd – for “everything you do to take forward the relationship” between the UK and Israel.