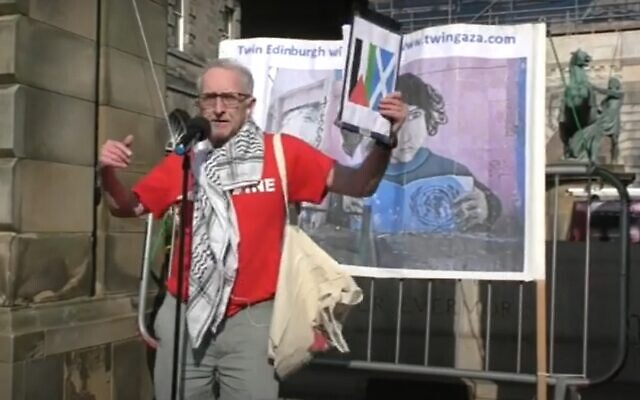 Edinburgh City Council is to formally discuss a petition calling for it to be twinned with Gaza City – which has been submitted by an activist expelled from a trade union over claims of antisemitism.

The Twinning Edinburgh with Gaza Petition will be discussed by the council as part of the agenda for Policy and Sustainability Committee next Tuesday morning, 29 March.

It was authored by Pete Gregson, a former GMB Union shop steward who was expelled from the GMB in 2019 after claiming Israel was a “racist endeavour” that “exaggerates” the Nazis’ murder of six million Jews “for political ends”.

It has also been backed by Tommy Sheppard, the Scottish National Party MP for Edinburgh East and SNP MP for Central Ayrshire Philippa Whitford.

The anti-Zionist writers Norman Finkelstein and Ilan Pappe are also listed as backers of the twinning proposal.

The UK Lawyers For Israel group are amongst those raising objections to the move.

In a letter sent to the Head of Legal Services at the Council the UKLFI stated that because Gaza City is “ruled by Hamas, which is proscribed in its entirety under the Terrorism Act 2000…  it is very difficult to see how Councillors or Officers could participate in any twinning activity without committing criminal offences.”

The UKLFI letter added: “The Jewish community in Edinburgh is alarmed by the petition, especially as it promotes the elimination of Israel as the world’s only Jewish state.”

In the official petition document, the campaigners wrote they were motivated to call for the twinning because Britain was “to some extent the architect of the Palestinian’s misfortune by having gifted the beginnings of what is now Israel to Zionists through the 1917 Balfour Declaration.”

The document added: “By twinning, the City of Edinburgh can show the people of Gaza City they are not alone, and that Scottish people see their pain and care for their future wellbeing.”

Luke Akehurst, the director of We Believe In Israel campaign group has also written to the Scottish council stating: “I appreciate that this is a superficially attractive way of showing solidarity with people in Gaza and the dreadful circumstances they are in.

“Unfortunately, Gaza is controlled by the terrorist group Hamas, and this makes it very difficult for councils or civic society in the UK to meaningfully interact with the people of Gaza, without doing this through a filter of Hamas control and lending legitimacy to Hamas and the institutions it uses for its totalitarian rule over Gaza.”

At a rally held outside the City Chambers on Edinburgh’s High Street last Wednesday, Greg​son attempted to defend Hamas, claiming the group had only killed “44 people” and he spoke in favour of his move to twin the Scottish city with Gaza.

He said he used the council petition process to lodge the twinning petition since 2019, and admitted Edinburgh Action For Palestine had rejected the idea saying to him “you are just going to promote Hamas.”

The SNP and Labour currently control Edinburgh Council with a minority coalition.