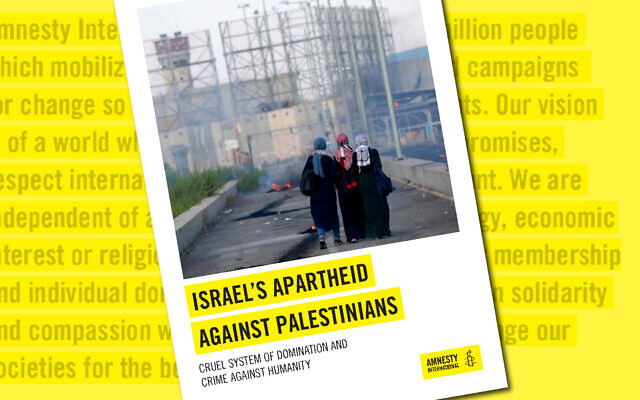 The Amnesty report was published earlier in February

The Charity Commission has confirmed to Jewish News it is assessing whether donations were used to fund Amnesty International’s “apartheid state” report on Israel – and “if so, whether this is of regulatory concern”.

A spokesperson for the watchdog said it was “aware” of concerns raised over this matter and “in line with our standard process are currently assessing information to determine if charitable funds have been used to fund the report and, if so, whether this is of regulatory concern. ”

Amnesty raises money in Britain as a charitable trust, which means that it receives tax benefits such as gift aid from Her Majesty’s Revenue and Customs.

However, it published its reports through a limited company, Amnesty International Ltd, which it funds.

Charity Commission rules say that when charities do this, they must ensure that the company uses its funding for charitable purposes and the “public benefit”.

In a report published earlier this month Amnesty international said that Israeli laws, policies and practices against Palestinians in Israel and the occupied territories amounted to apartheid.

The report alleged that the state of Israel maintains “an institutionalised regime of oppression and domination of the Palestinian population for the benefit of Jewish Israelis”.

The report repeatedly said that the Jewish state is guilty of human rights breaches.

Jonathan Turner, chief executive of the UK campaign group Lawyers for Israel, was amongst those who raised the issue of those sponsoring the report.

He said: “The Charity Commission and HMRC should consider whether the sponsorship of this report by Amnesty International’s UK Charities is compatible with their charitable status and tax benefits.”

Lord Carlile, QC, the former government reviewer of anti-terrorism legislation, called the report “overtly political”, adding:“This is on the very edge of their permissible role as a charity.”

Marie van der Zyl, president of the Board of Deputies of British Jews, and Keith Black, chairman of the Jewish Leadership Council, said in a joint statement: “At a time of rising attacks on Jews around the world, Amnesty’s report is not just an attack on the state of Israel. It is an attack on the very concept and existence of Jewish sovereignty and on the Jewish people.”

A Charity Commission spokesperson confirmed to Jewish News they were aware of questions now raised over the legality of funding of the report.

A spokesperson said: “We are aware of this matter and in line with our standard process, are currently assessing information to determine if charitable funds have been used to fund the report and, if so, whether this is of regulatory concern.

“Amnesty International, the author of the report, is not a charity and therefore outside of the Commission’s jurisdiction. We cannot comment further at this time.”