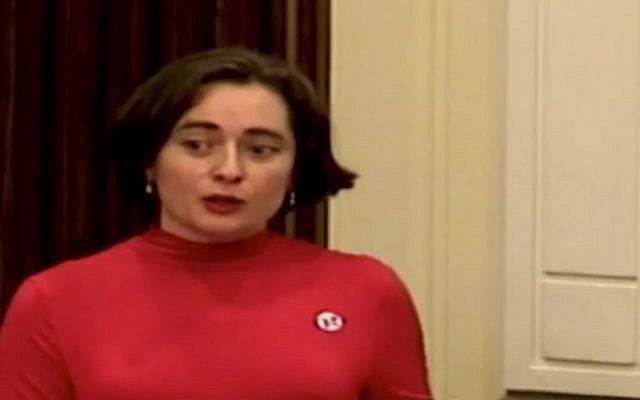 A councillor expelled by Labour over her support for a proscribed group, is behind a pro Boycott Divestment and Sanction motion targeting nine Israeli companies.

Jo Bird, a councillor in Wirral, Merseyside, was kicked out from Labour last November over her involvement with the Labour Against The Witch-Hunt group – an organisation that denied and downplayed antisemitism allegations.

She had been previously been suspended by the party over speeches in which she joked about “Jew process” and claimed anti-Jewish racism was given preference over other forms of discrimination.

But Bird, now an independent in the Bromborough ward, has led demands for Wirral’s Pension Committee to pass a motion that would make the linked regional Merseyside Pension Fund call into question its continued investment in the nine companies, accused of supporting settlements in the West Bank.

Luke Akehurst, director of We Believe In Israel, told Jewish News:”It is disappointing that a councillor expelled from the Labour Party, Jo Bird, appears to be calling the shots on whether a major local authority pension fund continues to invest in companies connected to Israel.

“Given that the Conservative and Labour Parties nationally  are opposed to BDS, we call on councillors of all parties  on the Pensions Committee concerned to oppose this step towards divestment.

“This looks like an attempt to push a local government BDS move under the wire at the last minute given that government has expressed intention to legislate to ban BDS by councils.”

In evidence supporting her move, Bird, who was on the Pensions Committee when she was still representing Labour, has submitted a letter written to her by Amnesty International’s Peter Frankental, the human rights organisation’s Programme Director of Economic Affairs.

Frankental writes:”Our conclusion is that no due diligence process, however enhanced, can overcome the reality that all companies that do business with Israeli settlements are contributing in some way to the maintenance, development and expansion of the settlements, and therefore reinforcing an illegal situation.”

Bird had first raised the issue of the Merseyside Pension Fund’s links to the Israeli companies in a question at a council meeting last November and it was agreed that a report on the matter would be brought to the next meeting of Pensions Committee.

It is understood the Wirral Pension Committee who will vote on the recommendations  in the report next Wednesday is composed of  four Conservative committee members, three Labour and one Green.

A public information pack published ahead of next Wednesday’s vote on the divestment move names the nine Israeli companies – who include Bank Leumi Le-Israel, Motorola Solutions Israel, Bank Hapoalim and Expedia Group Inc.

It also includes a response to the divestment motion from Jonathan Turner, from UK Lawyers For Israel which notes:”There is widespread misinformation about Israel and its administration of the West Bank.”

Turner also writes:”With regard to the second point, we note that strong feelings are held on both sides of the Israeli- Palestinian conflict. We do not believe that it can be said that there is a consensus in favour of divestment targeting Israel or areas under Israeli administration.

“Wirral Council is bound by the Public Sector Equality Duty (“PSED”) in section 149 of the Equality Act 2010, which requires it in the exercise of its functions to have due regard to the need to eliminate discrimination and to foster good relations between people of different nationalities, ethnicities and religions.”

Turner adds there is “substantial linkage between the the promotion of BDS and targeting Israel and antisemitic attacks.”

The report submitted to the Wirral Pension Committee “recommends the action that could be taken in response to concerns expressed to the Committee about the Pension Fund’s investment in companies that are alleged to be facilitating the construction and continued existence of Israeli settlements in the Occupied Territories of Palestine (OPT).”

The Pensions Committee is recommended to consider the report and request the Director of Pensions to take action including seeing ” to engage directly with the nine companies in which the Pension Fund has invested and which appear on the United Nations database as carrying on commercial activities which facilitate the construction and maintenance of Israeli settlements in the Occupied Palestinian Territories.”

It adds that “in particular the nine companies should be requested to respond to the allegations that they are supporting the Israeli settlements in the ways alleged in the UN database and given 60 days to respond.”

The report suggests the Director of Pensions “should consider notifying the nine companies that the Pension Fund may draw adverse inferences from any failure on their part to respond in a satisfactory fashion to the request for information including discontinuance of its investments in the companies.”

But UK Lawyers For Israel’s Turner concluded:”The implications of a decision to divest from holdings in companies because they operate in the West Bank has implications that go far beyond the value of these individual holdings. It would be acutely divisive, promote antisemitism and exacerbate tensions between different communities. Even if limited to companies operating in the West Bank, the detriment to the Fund could well be significant. ”