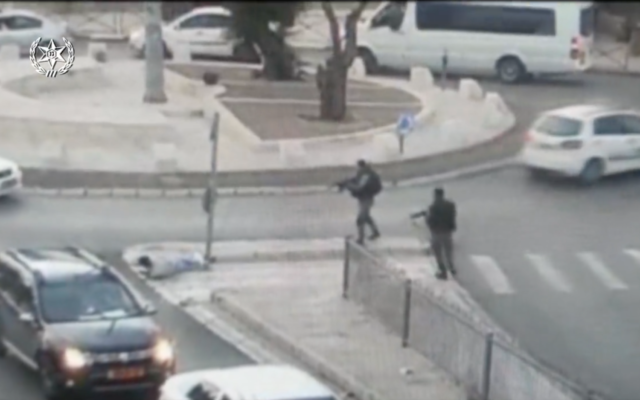 Assailant lies on the ground after being shot by Israeli police

A Palestinian man was killed by Israel’s border police after he stabbed an Orthodox Jew near the Damascus Gate in Jerusalem’s Old City Saturday.

The stabbing was the second incident of suspected terrorism in Jerusalem in less than two weeks. A gunman associated with Hamas opened fire in the Old City on Nov. 21, killing an Israeli man, Eliyahu Kay, and wounding several others.

Video of Saturday’s incident released by the police shows the assailant, identified as Muhammad Salima, crossing the street before attacking a man who had been walking behind him. Salima then starts to run towards two Israeli police officers stationed nearby, who shot him, causing him to fall to the ground. The officers shot Salima again while he lay on the ground, where he died.

The victim in Saturday’s attack, a young Orthodox man, was taken to the hospital with what news accounts said were moderate-to-severe wounds.

The 25-year-old assailant was from the town of Salfit in the West Bank and had entered Israel illegally. The Arab cab driver who drove him to the site of the attack was taken into custody by Israeli police, who suspect he may have assisted Salima, according to The Times of Israel.

Several Arab leaders in Israel criticised the officers for shooting at Salima while he lay on the ground.

“There was once talk of ‘neutralisation.’ He’s on the ground and a homicide video is being made of him. Execution of a person who no longer poses a threat is a horrible and terrible crime. This is the reality that the occupation produces,” Aida Touma-Sliman, a member of the Israeli Knesset from the Hadash party, wrote in a tweet along with a video that shows Israeli police shooting Salima.

Other accounts that shared the truncated video online did not acknowledge that the shooting by police took place after a stabbing. “Field executions, no matter the context, are unjustified,” tweeted Mohammed El-Kurd, a prominent Palestinian commentator who lives in Jerusalem, in response to questions about why.

Israeli Prime Minister Naftali Bennett tweeted in support of the officers Sunday, saying they “prevented murder and acted with operational resourcefulness within a few split seconds — as is required of fighters in such an operational situation.”

A riot broke out at the site of the stabbing, with Israeli police firing stun grenades at the Palestinians gathered there. The site, near the Damascus Gate, was the site of protests in May during the latest conflict between Israel and Hamas in Gaza.

The stabbing attack today at Damascus Gate in Jerusalem pic.twitter.com/BiomqC27wA 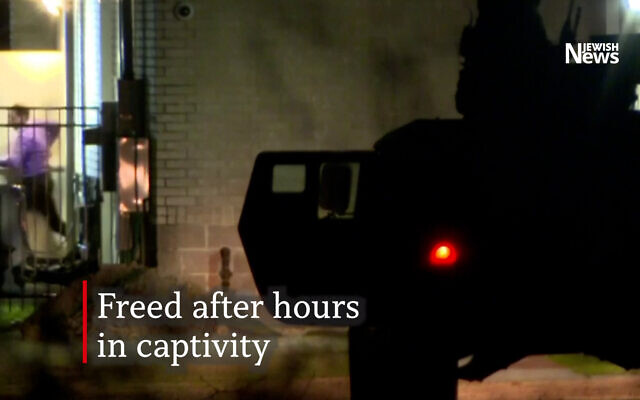