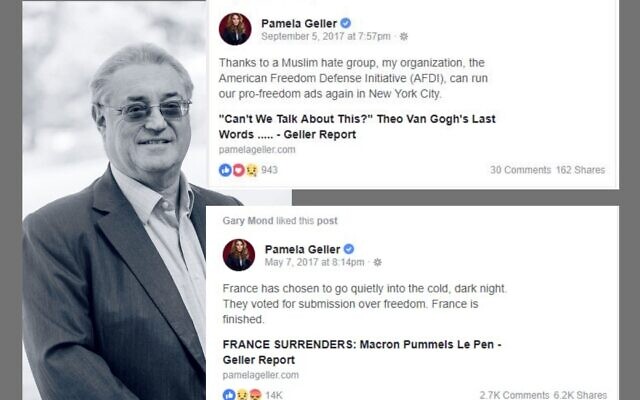 Gary Mond has resigned as an Honorary Officer at the Board Deputies after it announced an investigation into his social media posts and allegations of anti-Muslim sentiment.

The chair of the Communities and Education Division, and the JNF UK Deputy, announced his decision to stand down on Thursday.

He claimed the Board had “effectively cancelled my views” and suggested the Board faced a “crisis of legitimacy” with a leadership that “leans to political left.”

In a statement confirming his resignation Mond wrote:” I am today announcing my resignation as Senior Vice President of the Board of Deputies of British Jews and from the Board completely.

“Last May I was elected Senior Vice President, with the largest first preference vote of all of the candidates. Those who voted for me were well aware of my connection to the JNF. I was and remain exceptionally popular among Deputies, as evidenced by the support I have received in recent days – verbal and written – from so many.

“Key people at the Board have made it clear that they no longer wish to work with me, which effectively forces my decision. Democracy, which the Board claims to be so proud of, is all about the representation of different political opinions, especially when those views resonate with a large number of Deputies and also widely in the Jewish community. The Board has effectively ‘cancelled’ my views.

“In my opinion the Board has become unwilling to take account of differing views in recent years, with policy regularly being made by the Honorary Officers on important issues, without the Deputies having a chance to vote. While it is well known that Deputies are very divided, with last May a sitting President having been opposed for re-election for the first time since 1964 and witnessing 44% of the votes cast for the challenging candidate, the Board, while having an appearance of democracy in terms of how Deputies join it, often doesn’t follow that in making policy.

“I believe that the Board faces a crisis of legitimacy, and their behaviour towards me demonstrates this. The leadership of the Board leans to the political left with the silent majority not being heard. While on some issues – particularly recently –  the Board has done well, overall I feel it is sliding into irrelevance.

“I apologise for any hurt that has been caused as a result of the excavation into my Facebook activity from many years ago. However, this cannot be a justification for any attempt to silence contradictory thought.

“Finally, I stress a comment that I made in an earlier statement, which is that I take a very positive view of the Muslim communities in this country and am delighted to work with them, opposing and condemning only those who wish to do those in the Jewish community and other communities harm. ”

Mond’s resignation came just one day after Jewish News published historic social media posts that appeared to have been posted by Mond – including an apparent show of support for Pamela Geller, an American far-right anti-Islam activist banned from entering the UK.

New evidence appeared to show Mond had “liked” two posts made by Geller in 2017, during his six year long stint sitting on the Board’s Defence Division – including one accusing France was “finished” after voters picked current President Emmanuel Macron over far-right challenger Marine Le Pen.

In another he appeared to suggest the West, along with Israel and China “is at war with Islam.”

In a further 2014 post, Mond also responded to concerns by another online user over a possible increase in the number of Muslim MPs in the UK parliament in constituencies where they could win support.

He wrote: “When this happens – and the odds are that it will – the Britain that we know will be gone forever.”