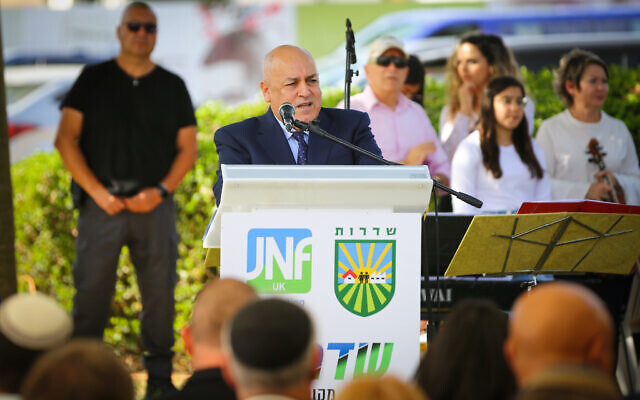 Businessman Samuel Hayek at a ceremony in the southern Israeli city of Sderot, marking the dedication of a city square in honor of late Prime Minister Yitzhak Shamir, on November 26, 2019. Photo by Flash90

A senior figure in the JNF UK organisation has written to all Deputies ahead of a crucial vote on the Board’s response to “Islamophobic” comments made by chair Samuel Hayek, attempting to explain exactly what the charity now does.

In an email sent on Thursday evening, Laurence Julius, a member of the charity’s executive board, wrote: “Based on conversations I have had over the past few weeks, there is clearly a lack of awareness of the amazing work done by JNF UK.”

He then added:”I want to tell you what JNF UK does and how its activities resonate with the values of the Jewish Community in Britain.:

Deputies will vote on Sunday’s Board of Deputies plenary on two resolutions – one calling for the JNF UK to “surrender its membership” from the communual organisation until Hayek is replaced as chair.

A second resolution calls for the censure of JNF UK over its failure to “disavow” Hayek’s “inflammatory and bigoted remarks.”

On Friday Hayek himself attempted to distance himself from comments made to Jewish News in an interview last month in which he claimed the future of Jews in this country was at threat due to Muslim immigration.

Hayek suggested his views had been misrepresented – but the interview is recorded on tape and includes further comments about the Koran.

Writing in the Jewish Chronicle, Hayek claimed to have “always fought prejudice and bigotry.”

In his email to Deputies, JNF’s Julius wrote: “I became reacquainted with what the JNF does around five years ago – I saw first hand what it is doing to transform the periphery, help the disadvantaged and impoverished – for all Israelis. It made me want to be part of it.

“It is very different from the image many of us have – it no longer plants forests, it only operates in Israel and mainly in the Negev and is not involved in anything remotely controversial. ”

Julius said: “JNF UK is totally independent of KKL (JNF) in Israel – they have no say or representation in what we do and vice versa.We may both decide to participate in the same project.

“JNF UK’s main current focus is on supporting charitable projects in the Negev and Galilee.”

A further statement sent by JNF Scotland – a separate entity linked to the worldwide KKL JNF organisation – sent to Deputies on Whatsapp, claimed: “We are also aware that most of JNF UK’s income is derived from wills and bequests. We believe that many of those donors die thinking that the money bequeathed will be transferred to KKL-JNF in Jerusalem for traditional JNF projects, unaware that the bulk of JNF UK’s monies go to non-JNF projects as seen fit by the current JNF UK trustees.”

JNF branches in the UK, Canada and USA have been known to donate directly to projects in Israel, on occasion jointly with JNF Israel, but are prohibited from making this policy as it is against laws on the funding of foreign charities.

One deputy, speaking on condition of anonymity, said he was looking to complain to the Information Commissioner’s Office – the data watchdog – over a possible breach of GDPR rules over Julius’ message to Deputies. He said: “When I gave my email address to the Board of Deputies, it was on the strict understanding that any communication would be about Board business, not propaganda for a member organisation.”

A spokesperson for JNF UK said: “For 120 years, JNF UK has been building Israel and helping its poorest citizens to become part of its success story. The charity does not take a stance on British domestic policies and in expressing his recent views Mr Hayek did not speak for the charity or its Trustees, as has already been made clear.”