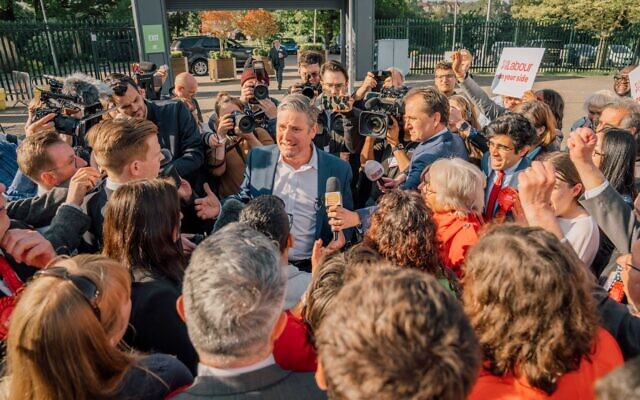 Keir Starmer has told Jewish News he is “humbled” that the people of Barnet have put their faith in Labour again, but says he is under “no illusions that our work to renew and restore our relationship with the Jewish community is complete.”

Speaking in the aftermath of his party’s landslide local election victory in Barnet, and a similarly healthy result announced later in Bury, Greater Manchester, Starmer said he recognised it was a “big decision” for some to vote for the party again following the antisemitism crisis.

Directly saying “thank you” to Jewish News readers who had voted for Labour candidates on Thursday, he added: “I am delighted and humbled that the people of Barnet have chosen to put their faith in Labour.

“I do not take lightly how big a decision this was for so many residents.

“The first thing I said as Labour leader was that I would root antisemitism out by the roots.

“When I said that I knew that our work could not be deemed a success until places with large Jewish populations like Barnet felt confident enough to vote for us.”

Similarly in Bury, which has the second largest Jewish community in the UK, Labour romped home as the results were confirmed on Friday with 29 seats to the local Tory Group’s 12.

Both results added weight to the argument that the community is comfortable again with Labour, after the years of anguish under Jeremy Corbyn.

But Starmer told Jewish News:”I am also under no illusions that our work to renew and restore our relationship with the Jewish community is complete.

“I see this as a nod of approval for what we have done so far and a demand to keep driving our party back to power.

“Labour is on your side, and we will not let you down.”

Durham police confirmed on Friday they are investigating whether the Labour leader broke lockdown rules on a visit during which he drank beer in an MP’s office.

The force initially decided that no offence had occurred on 30 April last year, but said it had since received “significant new information”.

It added that it had delayed announcing the investigation until after Thursday’s local elections.

Starmer said he was confident he hadn’t broken any Covid rules.