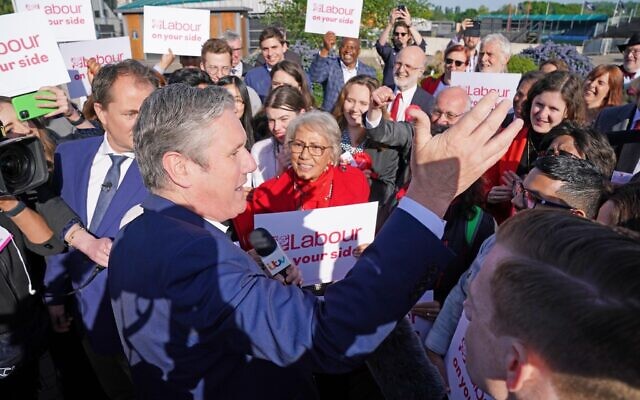 Labour has swept to a sensational victory in Barnet, taking control of the borough for the first time since its formation in 1964.

In a night of high drama at the Saracens Stone X Stadium in Hendon, numerous Jewish Labour candidates were elected in a result that will come as a major boost to Keir Starmer.

Barnet has the highest Jewish population in the country, and there was little doubt thousands had returned to a Labour Party they had fled under Jeremy Corbyn’s leadership. In Childs Hill, a former Tory stronghold, the senior Conservative Peter Zinkin was amongst those to lose out to three Labour candidates.

The council’s outgoing conservative leader Councillor Daniel Thomas later said his party had been caught in “a perfect storm” that had led to the party’s spectacular collapse.

He said: “We’ve been 12 years in government, the cost of living crisis, Partygate and I think those three factors are why we are having such a bad night.”

Labour leader Barry Rawlings told Jewish News that during the campaign ahead of Thursday’s poll, Jewish voters had raised concerns over issues such as the cost of living, schools and the environment, rather than raising complaints about antisemitism in his party.

Rawlings said that Barnet Labour had long been respectful of its Jewish community, and had been quick to adopt the IHRA definition of antisemitism.

He said his local party were ready to “listen” to the community over any concerns moving forwards.

Victorious Jewish Labour councillor Ella Rose has praised the “phenomenal job” Keir Starmer has done in rooting out antisemitism in his party.

Speaking at the Barnet election count at the Saracens Rugby Club stadium, Rose, said Starmer deserved a “huge amount” of credit for his leadership on the antisemitism issue.

“There will always been more to do to root out antisemitism, but Keir has done a phenomenal job so far,” she told Jewish News.

“Liron and I have worked incredibly hard and run a very good campaign.”

The final results in Barnet are still to be declared, and Starmer is due to arrive at the count at around 8am.