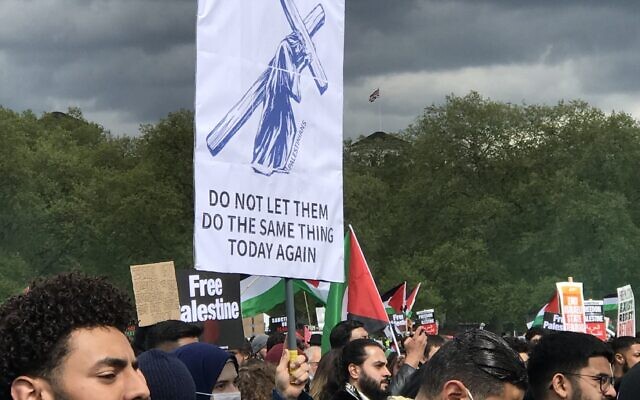 Banner at a recent pro-Palestine rally accusing Jews of being Christ-killers, an age-old antisemitic blood libel which has led to antisemitic attacks over the last 2,000 years.

Dame Maureen Lipman has resigned from the actors’ union Equity after it backed a pro-Palestine demo at which an antisemitic banner was displayed on Saturday.

A banner comparing the plight of the Palestinians with that of the crucifixion of Jesus Christ was held aloft at the demonstration in central London.

Evoking the antisemitic slur of Jews as ‘Christ-killers’, the banner read: “Do not let them do the same thing again today.”

Equity, which represents those in the performing arts, had encouraged members to attend the rally before it took place.

Other leading Jewish actors, including Tracy-Ann Oberman, have criticised the union’s president, Maureen Beattie, following the march, saying: “If you went on a DEMO that held these banners then you have to ask what you’re standing for … your president proudly stood encouraged endorsed this march.

“How are UK Jewish performers & friends meant to feel safe?”

Marie van der Zyl, president of the Board of Deputies, said the union had “lost the confidence of many of its Jewish members.”

“No one should feel they have to choose between their commitment to trade unionism and loyalty to friends, family and community,” she said.

Comedian Dom Joly added on Twitter: “This is truly disgusting. @EquityUK what the fuck is going on?”

In a statement published Thursday, urging members to attend, the union’s general secretary Paul Fleming said: “Violence directed against ordinary working people in both Israel and Palestine is appalling, and it is to be condemned by our movement.

“The disproportionate actions of the current Israeli government over the past few weeks, both in the policing of Jerusalem and toward Gaza, are particularly horrifying.”

Asked for further comment, a spokesperson for the union directed Jewish News to a series of FAQs on the Equity website.

These say that Equity regularly takes political stances on events all across the world and that the union wants to do more for ordinary Palestinians “not served by the violence perpetrated in their name by Hamas.”