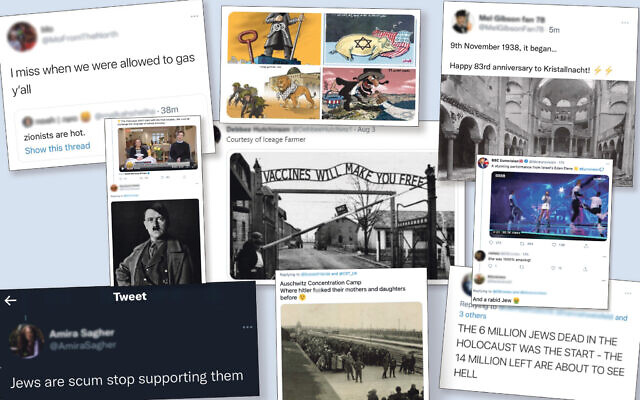 Almost half-a-million explicitly antisemitic tweets are sent per year – representing two for every Jewish person in the UK – a shocking new report has revealed.

After 18 months of research, the data estimates that there is up to 1,350 antisemitic tweets sent every day in the UK, representing 495,000 per year.

The figures were revealed in a study released by the Woolf Institute, presented in a report by the Community Security Trust and Antisemitism Policy Trust.

Examples of the vile antisemitic social media posts include messages about Hitler and the Holocaust, tropes about Jewish owners of football clubs and comparisons of the Shoah to Covid vaccines.

This comes as the government considers an Online Harms Bill, which seeks to tackle racism and hatred sent over the internet.

Tech Minister Chris Philp responded to the report, saying: “I’m appalled by these figures. Enough is enough. People should no longer have to face unacceptable racism and abuse anywhere, either in the street or online.

“Social media firms have failed to act so our pioneering Online Safety Bill will force them to tackle this kind of abhorrent behaviour. They will face huge fines or having their sites blocked if they don’t act.”

Danny Stone, chief executive of the Antisemitism Policy Trust however criticised the UK government’s approach, saying : “Policies to deal with online abuse aren’t worth the paper they’re written on if companies cannot effectively enforce them.

“This new report makes it crystal clear that Twitter’s systems for discovering and acting against anti-Jewish racism still aren’t good enough. As the Government considers new internet safety laws, I hope this report will weigh heavily on Minister’s minds.”

Dave Rich, Director of Policy, Community Security Trust, says: “It has long been known that social media is the engine of modern antisemitism, and it increasingly features in the antisemitic incidents that are reported to CST.

“This new research not only demonstrates how widespread this is, but also shows exactly how the social media companies are failing to control the problem of anti-Jewish hatred on their platforms.”

The report, commissioned by CST and ATP based on data from the Woolf Institute, is the third instalment of a project exploring anti-Jewish hatred on social media .

Antisemitic posts including Hitler, in response to a tweet with Holocaust survivor Lily Ebert (credit: CST and ATP)

The previous documents looked at Google and Instagram, and found that Google’s public facing Safesearch facility has no impact on the amount of antisemitic content, while antisemitism was found to be extensive on Instagram, due to “chaotic” trolling, conspiracy theories and anti-Israel attitudes.

Dr Julian Hargreaves, Director of Research at the Woolf Institute, who has led the project said: “Taken together, this series identifies and underlines that antisemitism persists on major social media platforms, and that either the tools for addressing it are not fit-for-purpose, or the public policies professed by the world’s leading social media giants are at best, poorly enforced and at worst, are completely ineffectual.

“Our reports identify that the systems – be they Safesearch, algorithms, or automated moderation are not doing their job.

“If antisemitism online and within our societies is to be effectively tackled and reduced, we will need platforms, in this instance acting as agents of harm, to better understand and to act upon what the evidence is clearly telling them.”

Lucy Powell MP, Labour’s Shadow Digital, Culture, Media and Sport Secretary, said the report “underlines the scale of the challenge facing us when it comes to tackling online hate. Twitter needs to get its house in order without delay, and put the right systems in place upstream so that harm doesn’t occur downstream.”

She also criticised the government for “holding up robust measures to crack down on hate. We have waited 10 years for a bill regulating the online space and the draft Online Safety Bill requires significant improvement and strengthening but has still not been introduced.   ”It is clear that the Jewish community and many others are paying the price for the Government’s failure to deliver their promises.”

Board of Deputies Vice President Amanda Bowman said: “The report’s findings – that some half a million antisemitic tweets per year are made viewable for UK users – demonstrate the extent of the Jew-hatred on just one major social media platform. We believe that the Online Safety Bill has the potential to drastically curtail this hatred and urge MPs to bear this in mind when the Bill comes to the Commons.”

Twitter spokesperson told Jewish News: “We strongly condemn antisemitism in any form. We’re working to make Twitter a safer place for online engagement, and to that end, improving the speed and scale of our rule enforcement is a top priority for us. We recognise that there’s more to do, and we’ll continue to listen and integrate stakeholders’ feedback in these ongoing efforts.”

The Department for Digital, Culture, Media and Sport has been approached for comment.