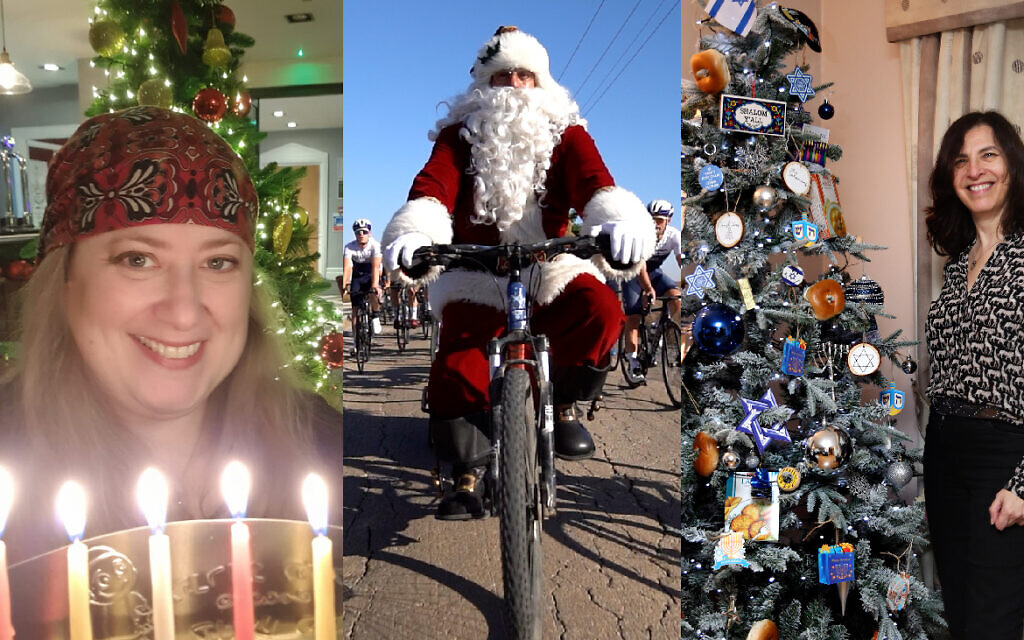 Whether or not you celebrate, tomorrow is Christmas Eve in the UK and around the world. And then it’s 25 December. For many in our community, the streams of fairy lights and bauble-decked trees in town centres are not a distraction.

For those individuals, Shabbat – with all the Friday night trimmings – will continue seamlessly, as it has done for thousands of years. There is a possible transport dilemma, due to reduced bus routes, but observant liberals will manage, as Edgware and Hendon Reform synagogue, along with other shuls, have appealed to members who can offer lifts.

‘Live and let live’ is the UK’s mantra and we are lucky to reside in a country where the singing of Let it Snow or Chestnuts Roasting on an Open Fire isn’t mandatory.

With the former written by Sammy Cahn and Jules Styne and the latter by Mel Torme, it’s arguable we should be familiar with the words. as well with Irving Berlin’s White Christmas and countless other Christmas songs written by Jewish composers who, in the 20th century, found music to be one of the rare industries where antisemitism wasn’t rife.

So don’t feel guilty if you start humming Jonny Marks’ Rudolph the Red-Nosed Reindeer, because you won’t be alone. There are a lot of Jewish families who get into the seasonal swing and even hang stockings by the fireplace that aren’t Bubbe’s 80 deniers.

When Andrea Solomon’s daughter asked if they could have a tree this year, she initially said no, but recalling that last year she had to isolate on Christmas Day, she decided to ditch the bah humbug attitude and get into the Christmas spirit.

However there was a caveat – it was yes to a tree, but only if it was decorated with a Jewish theme. 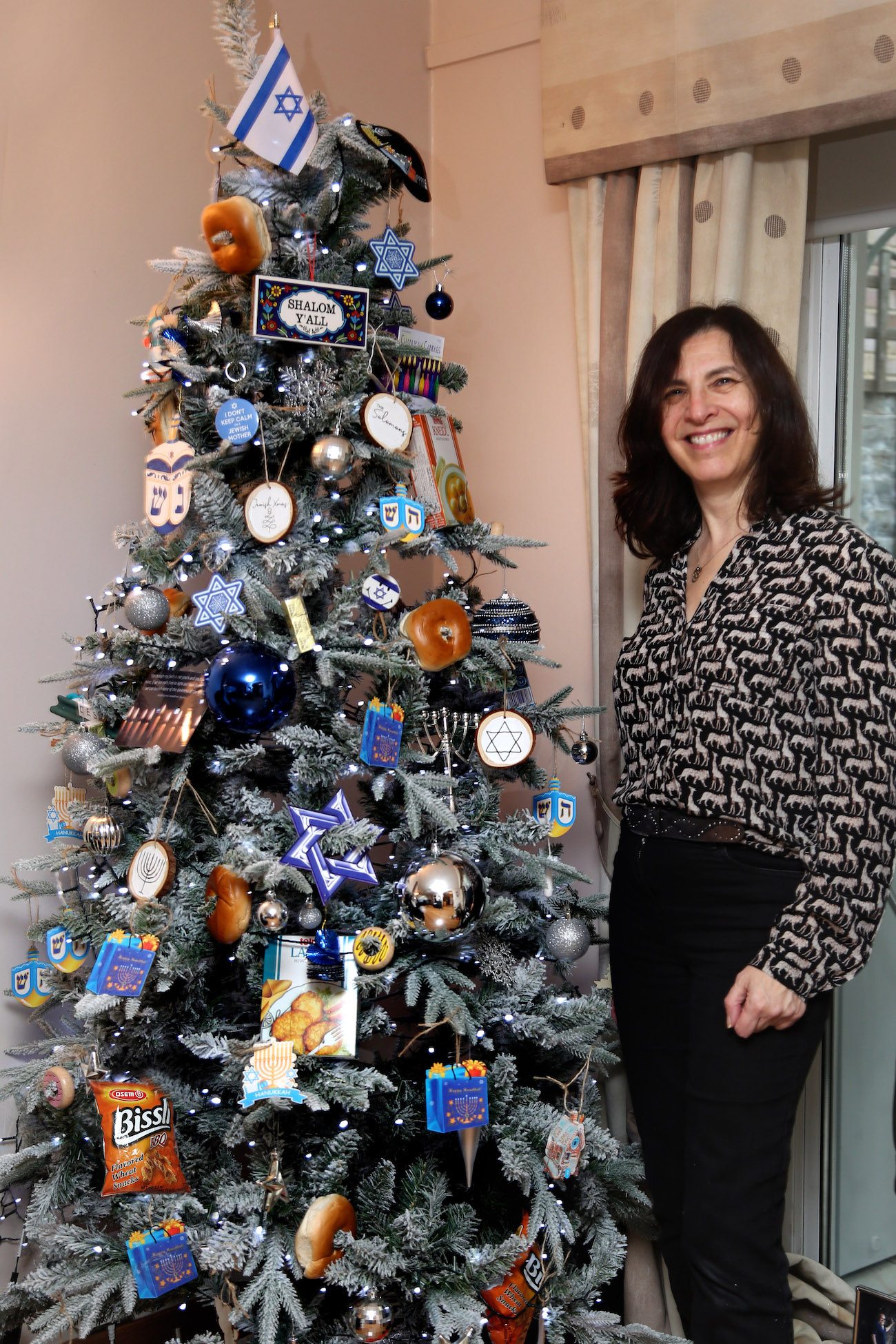 “We have bagels, boxes of kneidel mix , packets of Bissli and the blue-and-white Israeli flag on the top,” says Andrea.

“I love it – it brings me joy when I look at it. Although I’m very proud to be Jewish, I also recognise that I live in England and Christmas is all around us, so why not embrace it?

“Rabbi Sacks once said: ‘For though my faith is not yours and your faith is not mine, if we each are free to light our own flame, together we can banish some of the darkness of the world.’”

Orthodox comedian and writer Rachel Creeger does not celebrate Christmas, but she does find this time of year magical.

“I often do Christmas gigs and parties alongside Chanukah events and I mention in my set that I secretly quite like Christmas,” she says. “Growing up I used to think this time of year was sparkly and glamorous and I was always a little jealous of all my non-Jewish friends having trees and decorations. 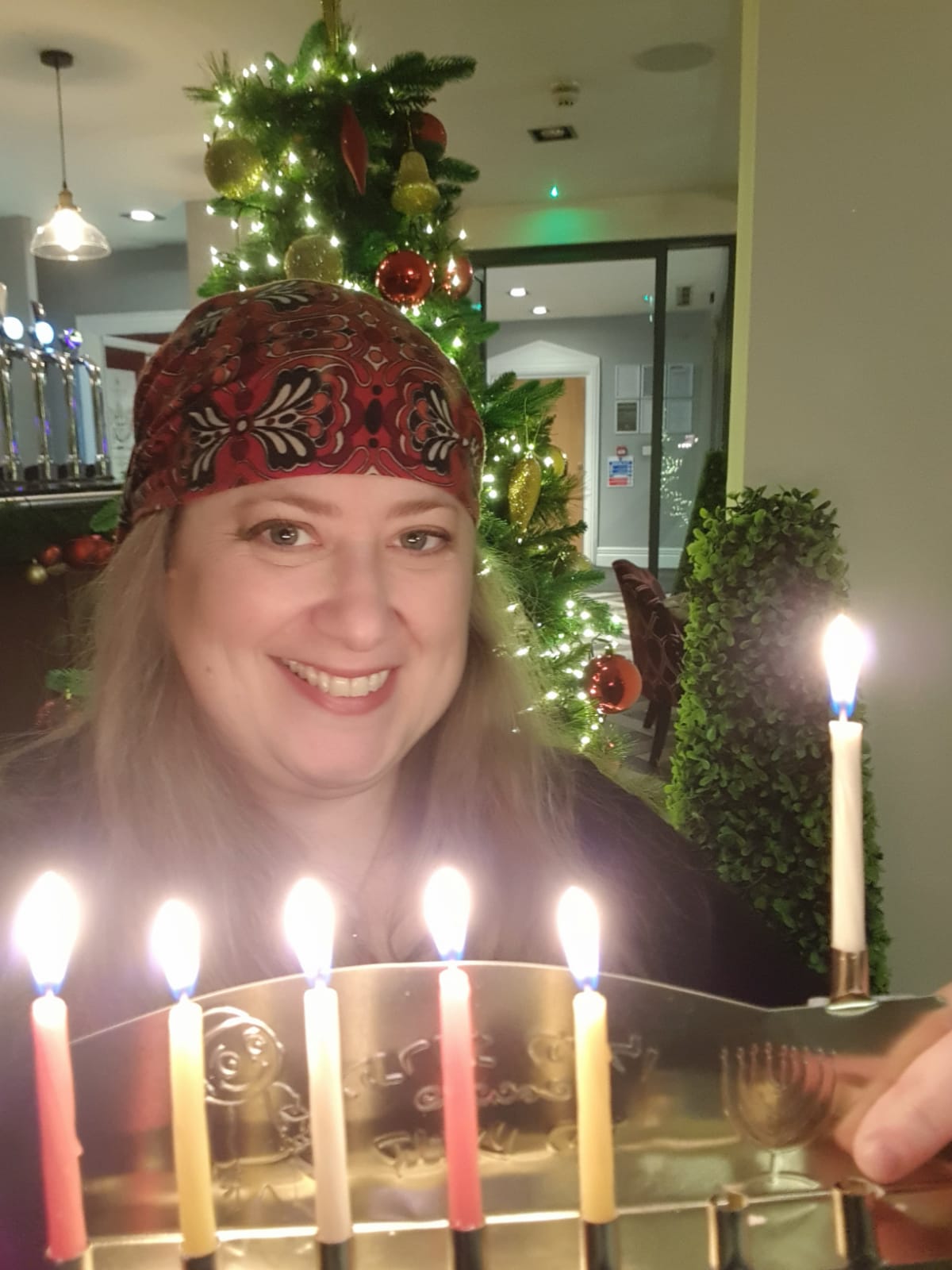 “I come from a medical family, so on Christmas Day they usually worked to cover for Christian colleagues. My cousins would often have a family get-together on the day or two after. It was never really to celebrate Christmas, but a chance to all meet up. My husband’s family are a mix of religions, so we have a mish-mash of Christmas cards and Chanukah presents.”

Rachel would usually be at Limmud over Christmas, but because it is online this year, Christmas Day itself will just be a quiet Shabbat at home with her husband.

“I might do a turkey cholent as a nod to both cultures and a bit of fun.” 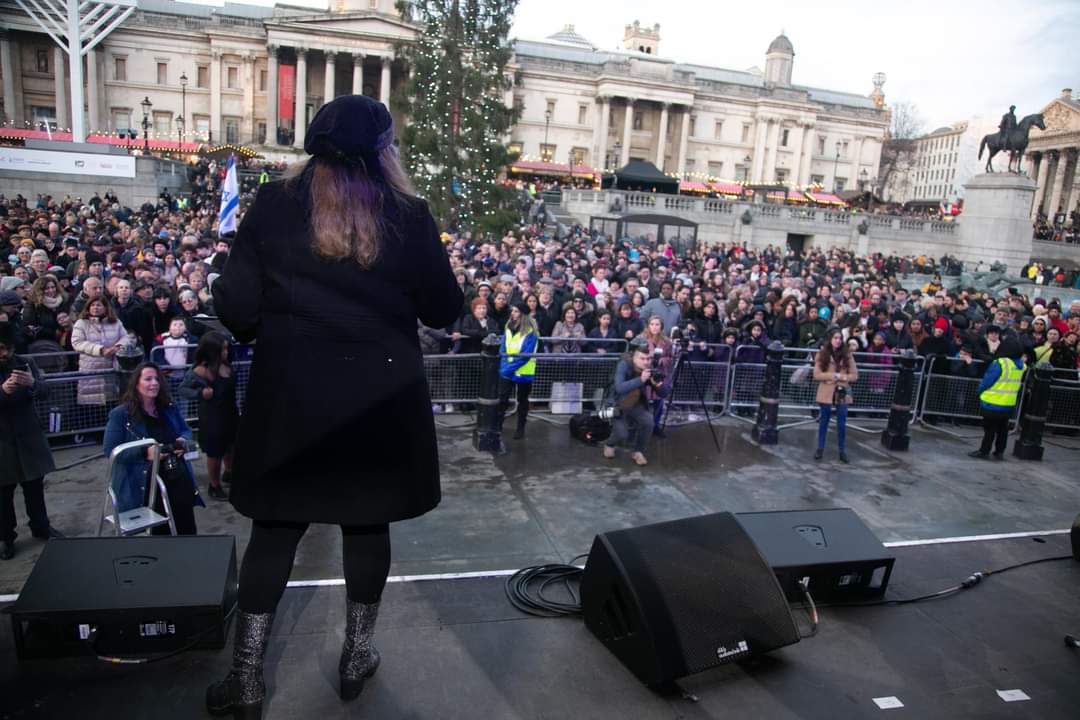 Rachel Creeger at Chanukah in the Square, with Trafalgar Square’s famous Christmas tree in the background

Nursing assistant Abigail Wise will be doing her first Christmas shift at the Royal Free Hospital. Having made a major career change in April after being a PA to a rabbi, this year her surroundings will be quite different. 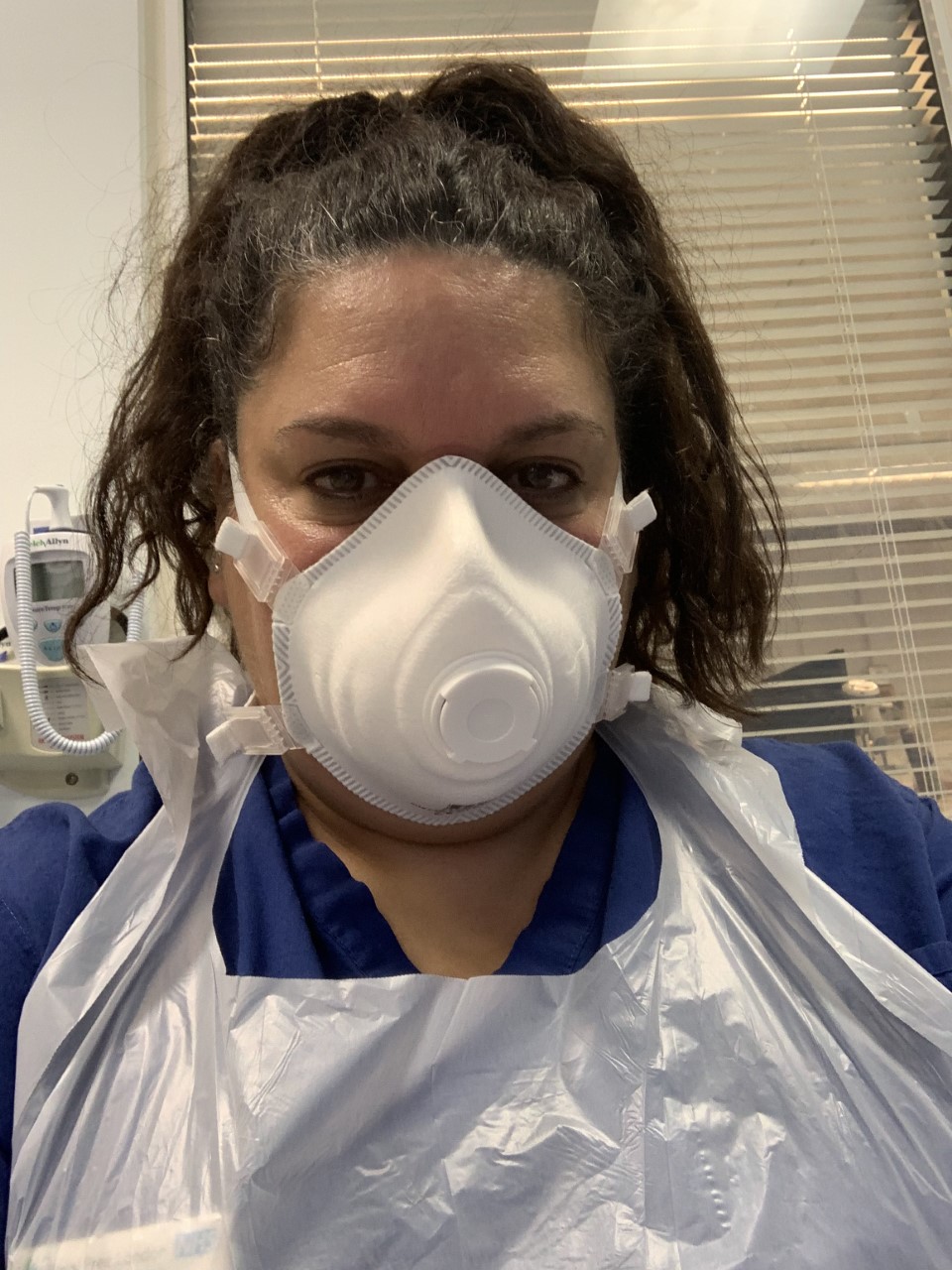 Abigail Wise normally goes to a kosher restaurant on Christmas day, but will be working a 12 hour shift instead

“I would normally go to a kosher restaurant on Christmas Day, but instead I will be doing a 12-hour shift on the infectious diseases ward,” says Abigail.

“We won’t know how many patients will be staying in for Christmas until the day, but there could potentially be up to 22 who will need to be cared for.

|For staff who want it I think there will be a Christmas meal, but I won’t be having that. There are no decorations or anything, so I guess it will feel just like a normal day.”

Rabbi Wollenberg will be treating Christmas Day like any other Shabbat, but over the festive period he thinks it is important to help others and will be spreading his own goodwill. 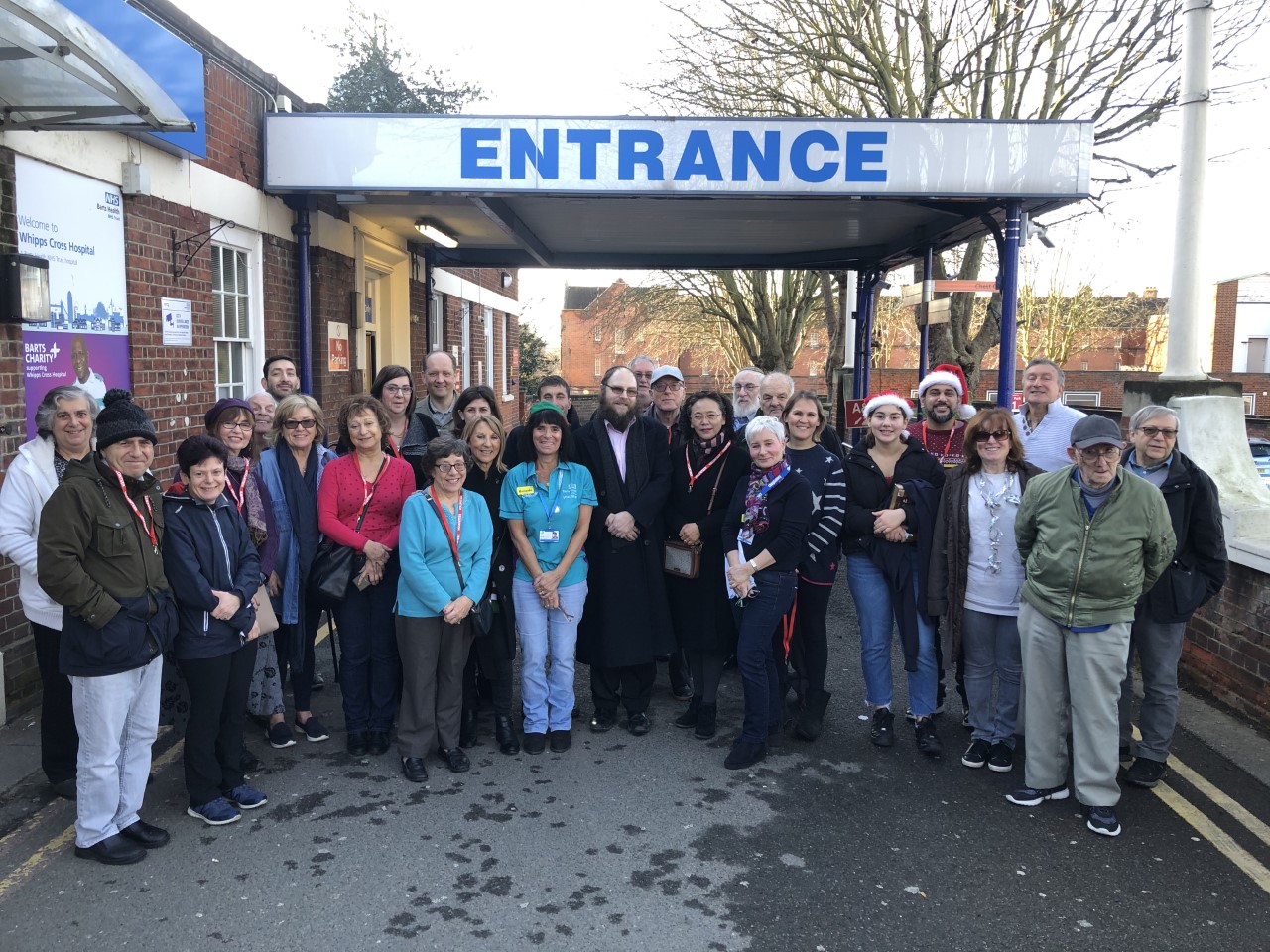 “My family and members of our community from Woodford Forest Synagogue will be taking biscuits and treats to those working in the emergency services to show our appreciation of what they are doing by giving up their special day,” he says. “I think it is something positive for the local community and we always get a great response when we visit hospitals, ambulance crews, fire stations and police stations in the area.”

When Marc Jacobs isn’t doing his day job as sales manager at Jewish News, he is more than happy to don a red suit and fake beard, all in the name of the festive season. During lockdown last year, Marc hooked up with two friends to bring a bit of Christmas joy to more than 700 families. Their Santa garden visits and door-knock surprise appearances were a great success. 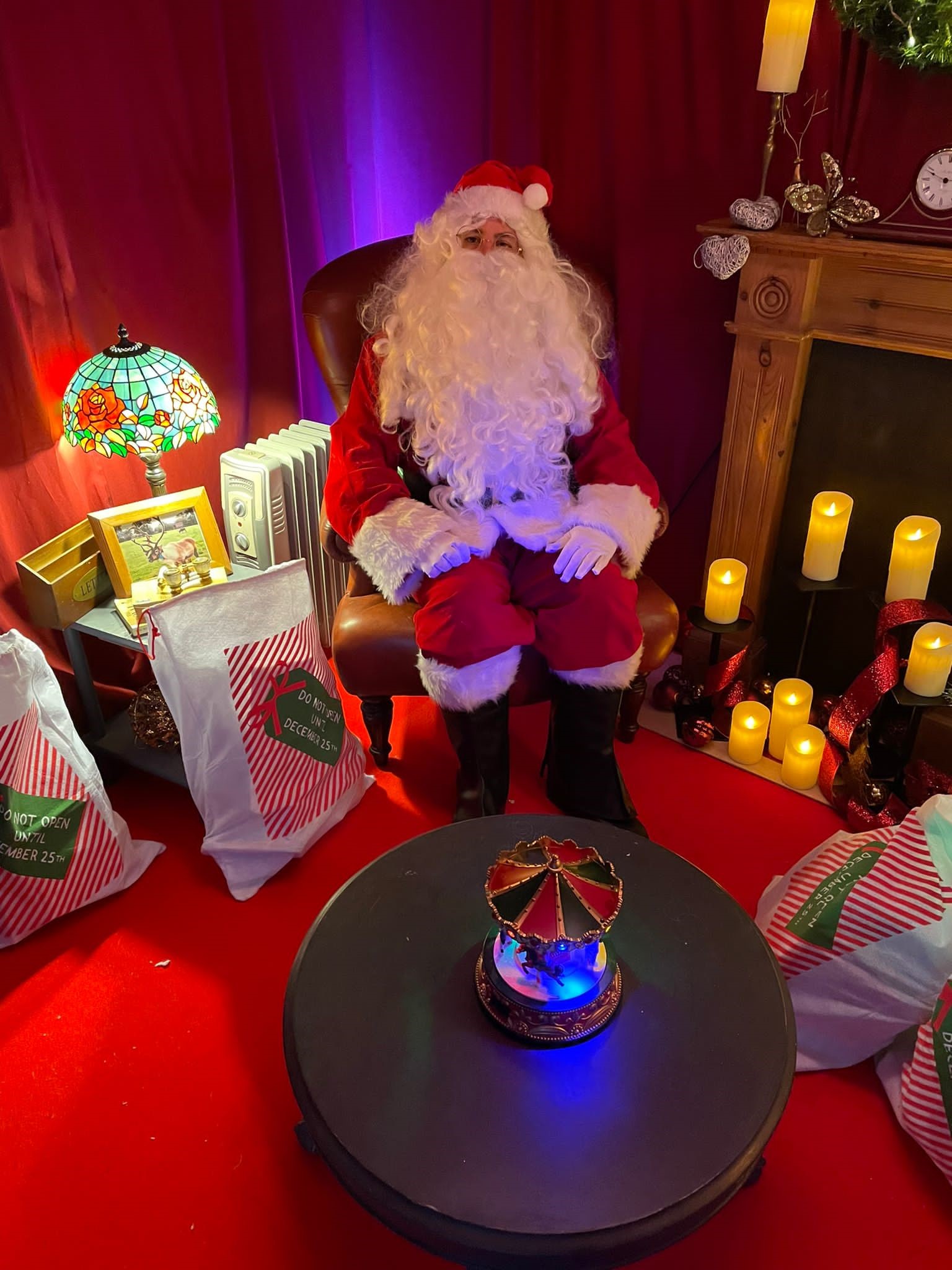 Santa in the garden grotto

This year they donned their red suits again to appear at seven Christmas parties at Allum Hall in Borehamwood and, down the road, opposite Kosher Deli and the kosher restaurant Sababa, they have built a grotto.

Set up like Santa’s sitting room with a fireplace and a framed photo of Rudolf on the table, children visiting might easily assume they have been transported to his digs in the North Pole.

“Most of our guests are Jewish,” says Marc, who lives locally and recognises pupils from Yavneh and Clore Shalom among the mix of those wanting a word with Father Christmas. 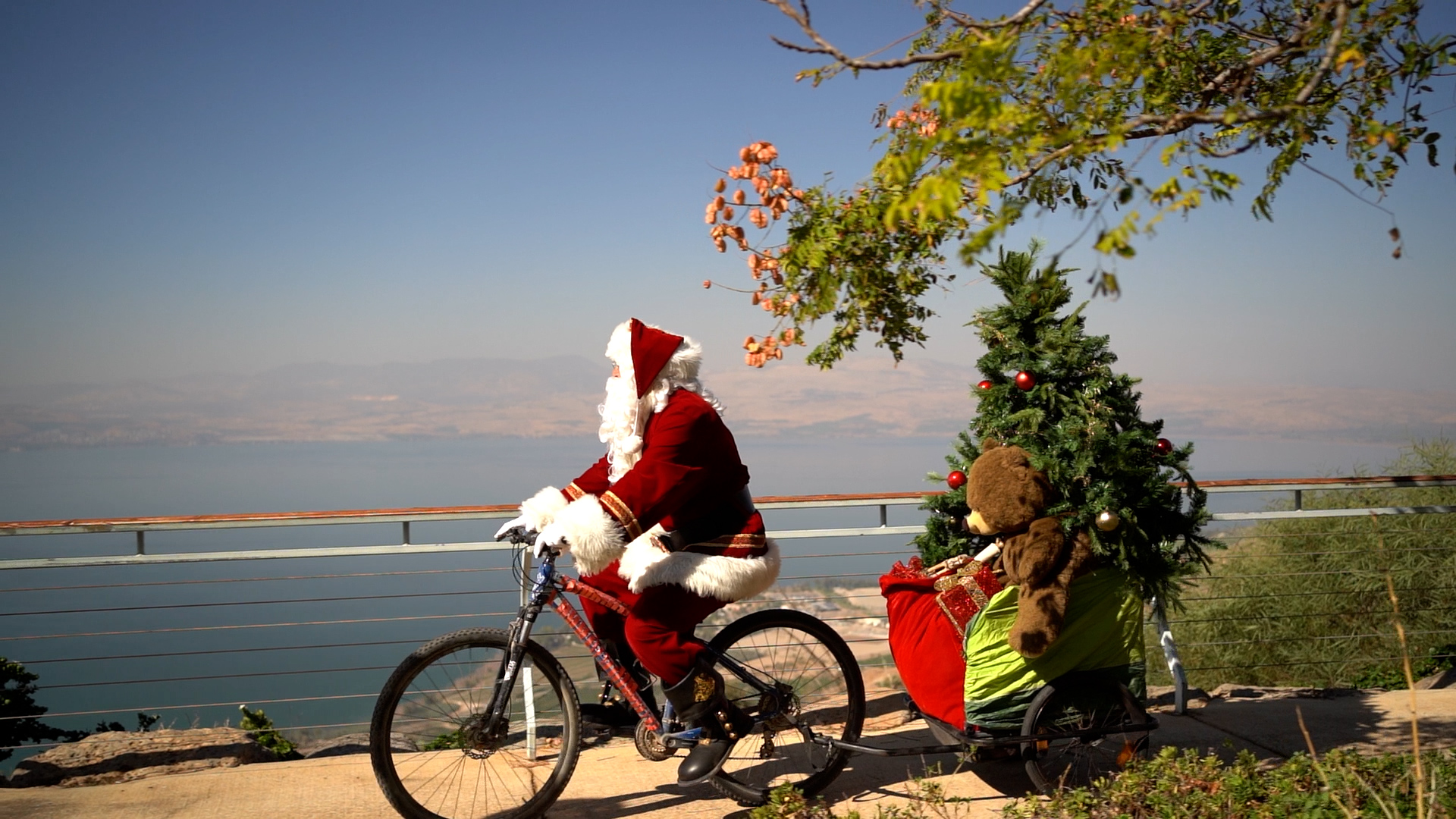 Santa in the Golan heights

Jerusalem has its own Santa in the shape of Issa Anis Kassissieh. His role as the only official Holy Land Santa began when he found a Santa Claus outfit in the loft, donned it for fun and went and stood by the Jaffa Gate.

He says: “Lots of children came over and asked questions. I realised that while Santa is deeply embedded in western cultures, in Israel – the place where Christmas began – we only know Santa through television and movies. I wanted to give the same joy to the children of Israel.”

This year Issa travelled to the Golan Heights to film a Christmas greeting to share around the world. He had a few adventures along the way, including kayaking on the River Jordan with Christmas tree in tow, cycling with Chris Froome and fellow members of the Israel Start-Up Nation professional cycling team, and watching the sun set over the Sea of Galilee – the perfect place to spread his message of love, peace and joy. 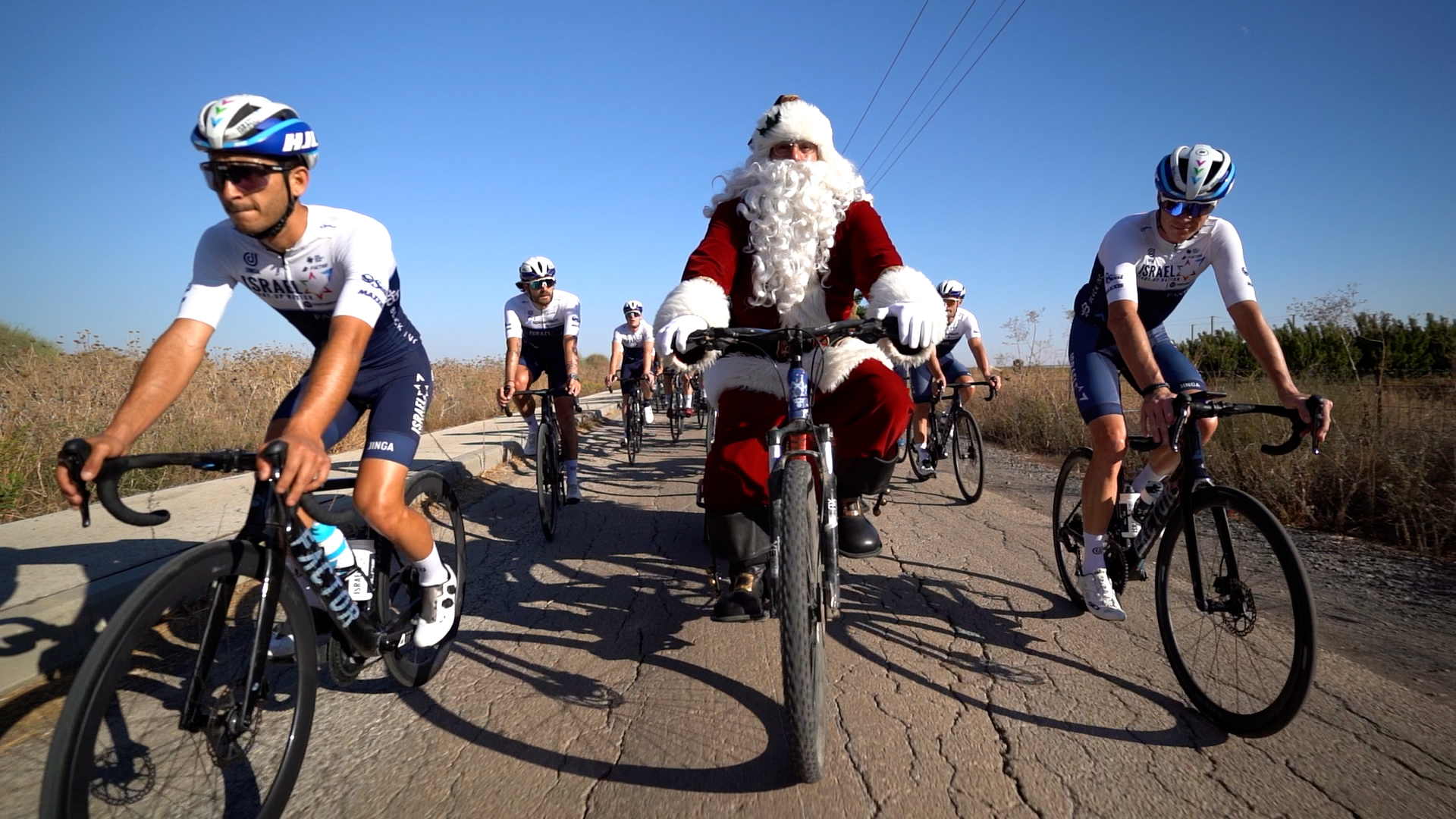 SANTA IS NOT JUST FOR CHRISTIANS

For Rick Rosenthal, being Santa Claus is not just for Christmas, but for life. Despite being an observant Jew living in an Orthodox community in Georgia, USA, he has made being Santa into a full-time job and even runs his own Santa school, along with his wife (Elf) Tracy.

Rosenthal first started dressing up as Santa as a teenager, entertaining his non-Jewish friends and decorating their trees with bagels.

When his parents died within two weeks of each other, Rick grew a beard as a sign of mourning, as is the Jewish tradition. A few weeks later, while shopping in his local Home Depot store , he saw a little boy staring at him while trying to get his father’s attention. 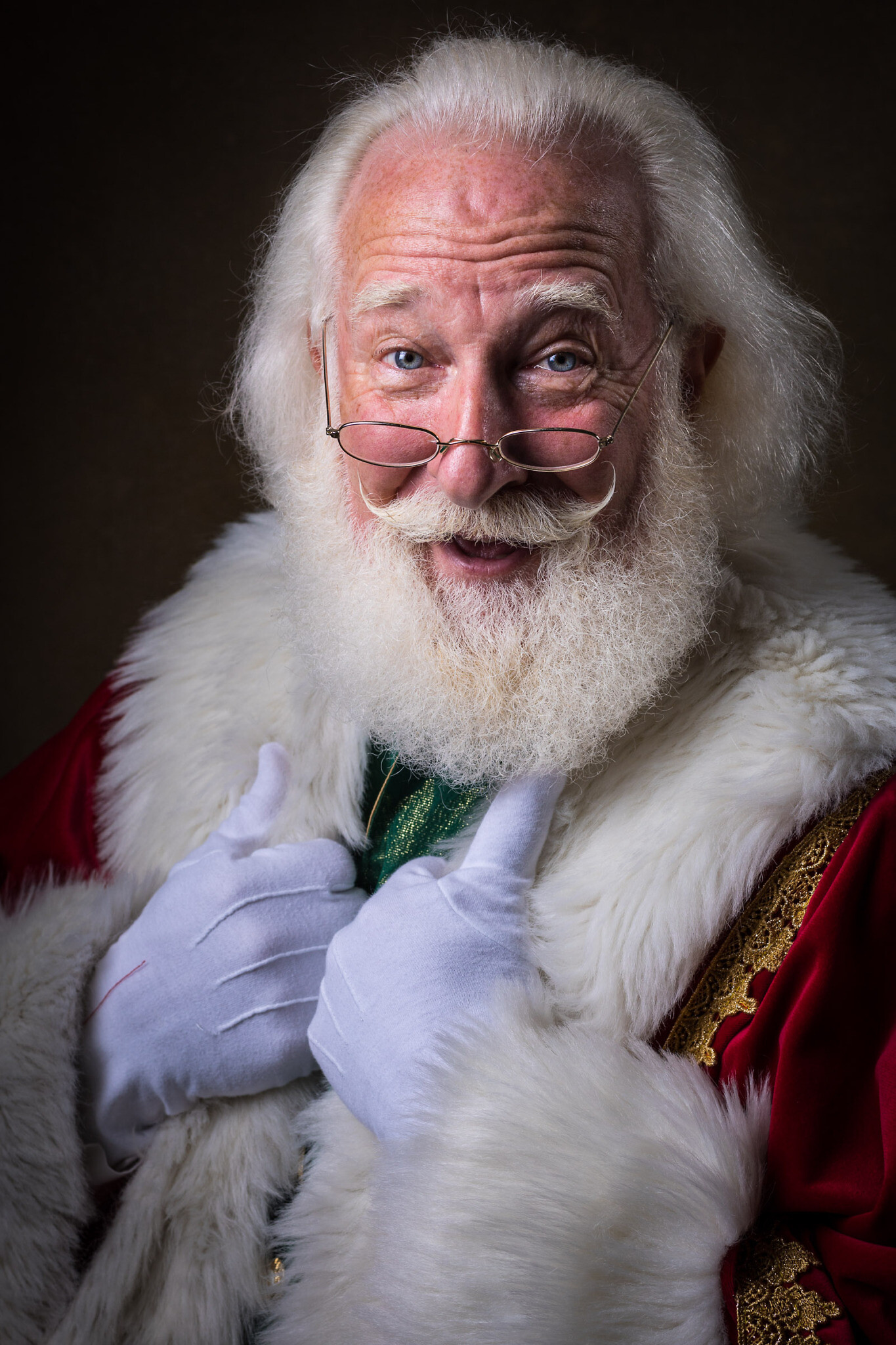 “I knew what the boy was thinking, and what I had to do. I walked over to him, put my hand on my lips like Santa does to do the ‘shhh’ sound and I got right in his face and I said, ‘Don’t tell anyone you saw Santa buying tools for the elves in Home Depot.’”

Whilst some may say it’s not a job for a Jewish boy, Rosenthal does not see a contradiction between his faith and his job.

For him, Santa isn’t a religious figure or a saint but just someone who helps people and brings joy.

“As Jews, we are to be a light unto the world,” he said. “That’s one of our jobs. If we can help make people’s lives better, we should do that.” 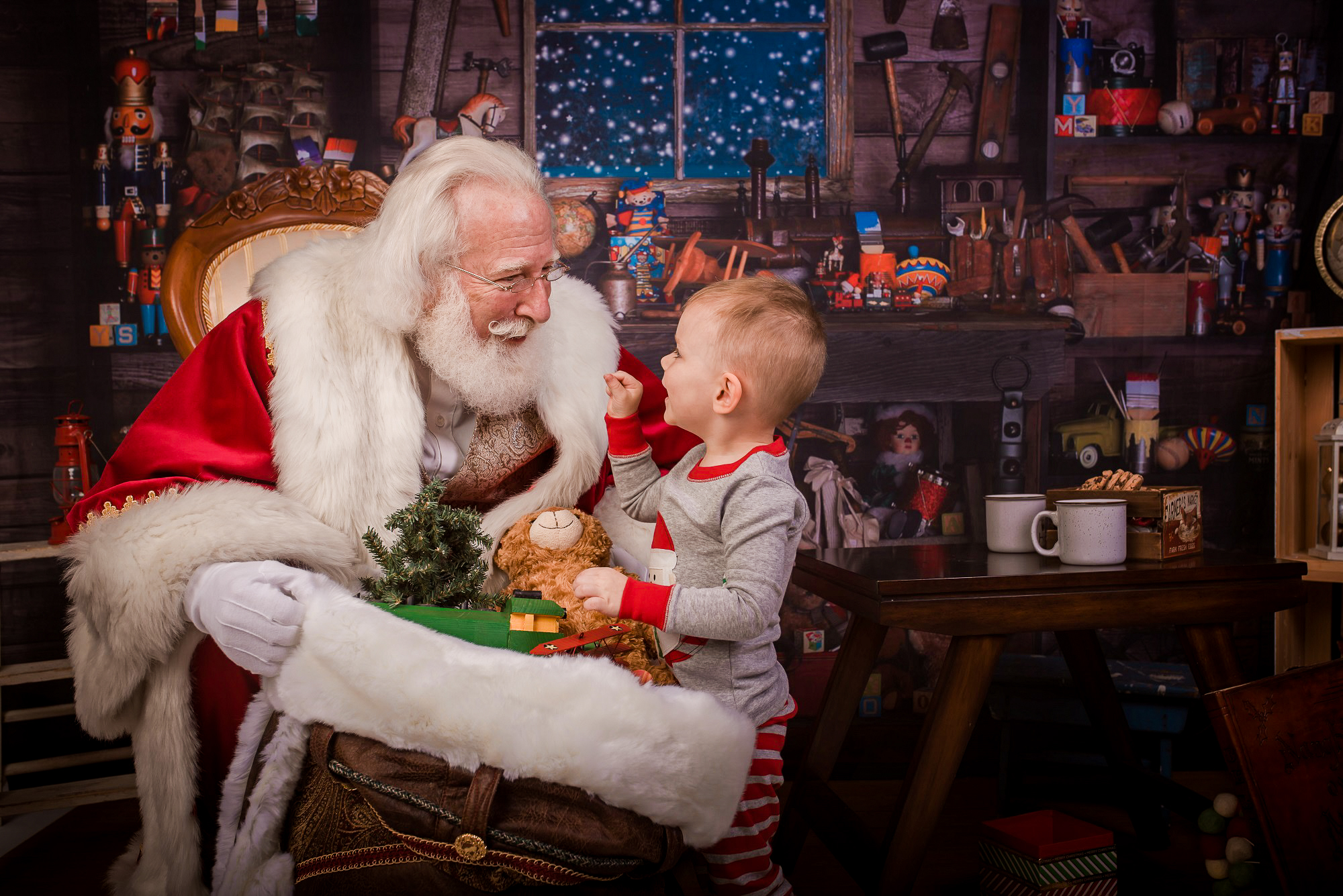