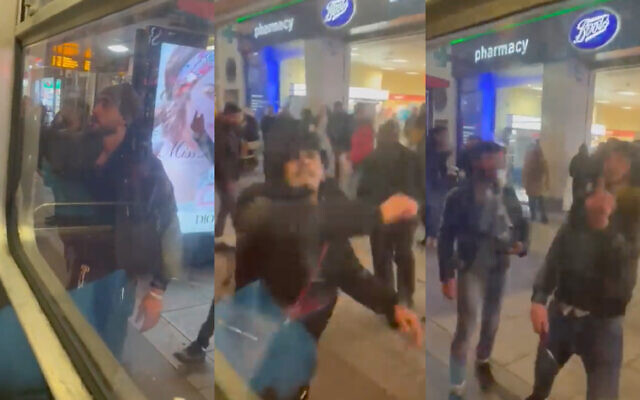 Police are investigating after yobs attempted to smash the windows of an open-top bus carrying Jewish teens celebrating Chanukah.

Shocking video footage shows the moment a group men began hurling abuse and threats, banging on the bus’s windows trying to smash them, spitting on the vehicle and swearing at them.

A number of men also removed their shoe, which is seen as a sign of disrespect in Arabic culture, and appear to raise their arm in the air, which some on social media compared to a Nazi salute.

The incident occurred in Oxford Street on Monday evening and was reported to the Community Security Trust by two people on the bus.

According to reports, the group from Chabad were celebrating the first night of Chanukah on an open-top bus, with music, dancing and handing out food.

The Metropolitan Police said officers were called to Oxford Street at around 8pm on Monday, but met the bus at another location after it moved on to “avoid any further confrontation”, police said.

Police urge anyone who recognises the men in the video, or who has any other information, to call police on 101 with the reference 6187/29NOV.
Information can also be provided to Crimestoppers on 0800 555 111.

The Met said: “The group shown in the video could not be located at the time of the incident and there have been no arrests.

“The incident is being treated as a hate crime and officers will be assessing the available evidence to identify any possible lines of enquiry.”

Dave Rich, CST’s director of policy, told the PA news agency: “They were quite frightened that the group who were threatening them were going to physically assault them, they were spitting at them.

“They were pretty scared and they definitely felt it was because they were Jewish that they’d been targeted, there was absolutely no doubt about that.”

“London is a city where Jewish people must be able to celebrate our festivals and enjoy an open, confident Jewish way of life, epitomised by the enormous Chanukiah in Trafalgar Square.

“This disgusting incident goes against everything this city stands for and should be condemned by all. We will be working closely with the police to support the victims of this attack and ensure that those responsible are identified and brought to justice.”

London Mayor Sadiq Khan said: “Antisemitism has no place whatsoever in society and I utterly condemn these disgusting acts. No one should have to experience this. “If you have any information about this incident, I urge you to report it.”

The London Jewish Forum said: “We are disgusted by this antisemitic incident that took place in the heart of London. Jews, including young children, should not be facing abuse of this kind. ”

Marie van der Zyl, president of the Board of Deputies said: “We are appalled by the horrifying footage of Jewish people targeted on Oxford Street. We note that besides attempts to spit at them, at least one of the perpetrators appears to be performing a Nazi salute. We hope the police will swiftly identify and arrest those involved in this disgusting incident.”

Councillor Rachael Robathan, leader of Westminster City Council, tweeted: “Deeply disturbing scenes of what appears to be an antisemitic attack against Jewish teenagers in Oxford Street.

“We utterly condemn this scenes and I will be raising this with @metpolice UK. We stand shoulder to shoulder with our Jewish community.”

Police urge anyone who recognises the men in the video, or who has any other information, to call police on 101 with the reference 6187/29NOV.
Information can also be provided to Crimestoppers on 0800 555 111.