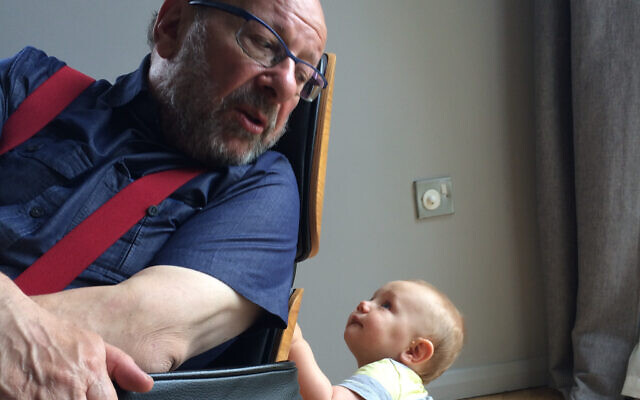 Brian Winston with his grandson Finn, who is now six years old

An influential journalism professor who helped to run the revived Jewish community in Lincoln has died, aged 80.

Brian Winston taught a generation of reporters at UK universities, many of whom went on to become the cream of the profession.

He also led the Jewish community in Lincoln, which grew from small beginnings in the 1990s – the first presence in the city since their explusion 750 years earlier.

Henry III executed 19 Jews on the false charge that they killed a nine-yearold boy, so he could seize their assets.

Winston wrote the plaque that in 2009 replaced one commemorating ‘Little Hugh of Lincoln’, who was alleged to have been killed in a ritual sacrifice – the most serious medieval English ‘blood libel’.

The death of the boy, whose body was found in a well a month after he vanished, was used as a pretext to execute 19 Jews, including one who was said to have confessed under torture. The events were chronicled by Matthew Paris, a Benedictine monk.

The city’s Jewish community now meet in an upstairs room of the Jews House on Steep Hill in the medieval quarter of the city, where Prof Winston would lead services and Seder.

Richard Dale, a lawyer who helped create the Lincoln community, said: “Brian’s services were the most interesting I’ve ever heard because of his knowledge of Jewish history.

“He was often critical of Israel and keen to share a meal with Muslims and Christians. He was full of energy and always intellectually extremely vigorous. Guide to the Perplexed by Moses Maimonides had a big impact on him.”

The academic, who died after complications arising from a fall at his care home, was a specialist in freedom of expression, documentary film and journalistic ethics.

He filmed the Beatles landing in New York for a World in Action documentary, was professor of journalism at the Cardiff University training course and a founder member of the the Glasgow University Media Group, whose books Bad News (1976) and More Bad News (1980) lacerated the British record on impartiality in TV and press coverage.

He grew up in Kilburn – where his father worked on a fruit stall before going on to selling shopping trolleys – and studied law at Merton College, Oxford, from 1960 to 63.

He was a researcher for Granada TV’s World in Action and a producer for the BBC.

He was media course director at Alvescot College, Oxfordshire, then lecturer at Bradford College of Art (1972-73) and Glasgow University (1974-76), in sociology. He was professor at New York University from 1979 and won a 1985 Emmy for documentary series Heritage: Civilization and the Jews for WNET-TV.

He was dean of communications at Penn State University, then ran the journalism schools at Cardiff (1992-97) followed by Westminster University (1997-2002), then Lincoln University, which in 2007, awarded him its highest honour, the title of the Lincoln professor.

He was involved in the prestigious documentary honours the Grierson Awards, and became a governor of the British Film Institute.

The funeral is in Lincoln next Thursday. He is survived by a widow, Adèle, son Matthew and daughter Jessica, grandsons Finn and Zac, and his partner, Gail Vanstone.

A serious academic who didn’t take himself too seriously

Professor Brian Winston was one of the first people in Oxfordshire to get a video tape recorder.

It was slotted into the middle of a bookshelf which took up an entire wall.

“I’ve got something you have to watch!” he would tell visitors.

As he was highly critical of BBC news coverage, they assumed it would be a demonstration of the superiority of ITN.

But the clip he would show was a cartoon. “Be wery kwiet… I’m hunting wabbits…” sings Elmer Fudd. It was Bugs Bunny starring in a three-minute version of Wagner’s 15-hour The Ring cycle.

Brian was also a very early owner of a Range Rover – the prestige saloon Land Rover designed for families who wanted to go off-road, an alien concept in 1970. He would take the children of friends on a 50mph thrill ride through the ploughed fields of Oxfordshire.

He also created a newspaper with children as its journalists – including this reporter – calling it after every one of the seven villages they came from, with “Gazette” on the end.

His daughter Jessica remembered: “Dad had a magic aura when it came to kids and young people – he was able to engage and encourage them and teach them new skills. Somehow, he maintained his energy but also his academic vigour.

“Once I was grounded but sneaked out to our youth club. My dad grabbed a coat and stormed out of the house screaming my name,” she recalled. “All he had on underneath was his boxer shorts.”