JNF UK has been censured by the Board of Deputies over its failure to “disavow” the “inflammatory and bigoted remarks” of its chair Samuel Hayek after a heated debate during Sunday’s plenary.

Two-thirds of Deputies voted in favour of a resolution tabled by Joel Rosen in response to remarks made to Jewish News by Hayek, who claims Jews have no future in the UK as a result of Muslim immigration.

Board President Marie van der Zyl confirmed the result was 64 percent in favour and 36 percent against.

The resolution noted how, when the JNF chair was asked to clarify his marks, he told Jewish News there were problems with Muslim immigrants because they “don’t speak English” and how in Islam there was “no term for peace”. 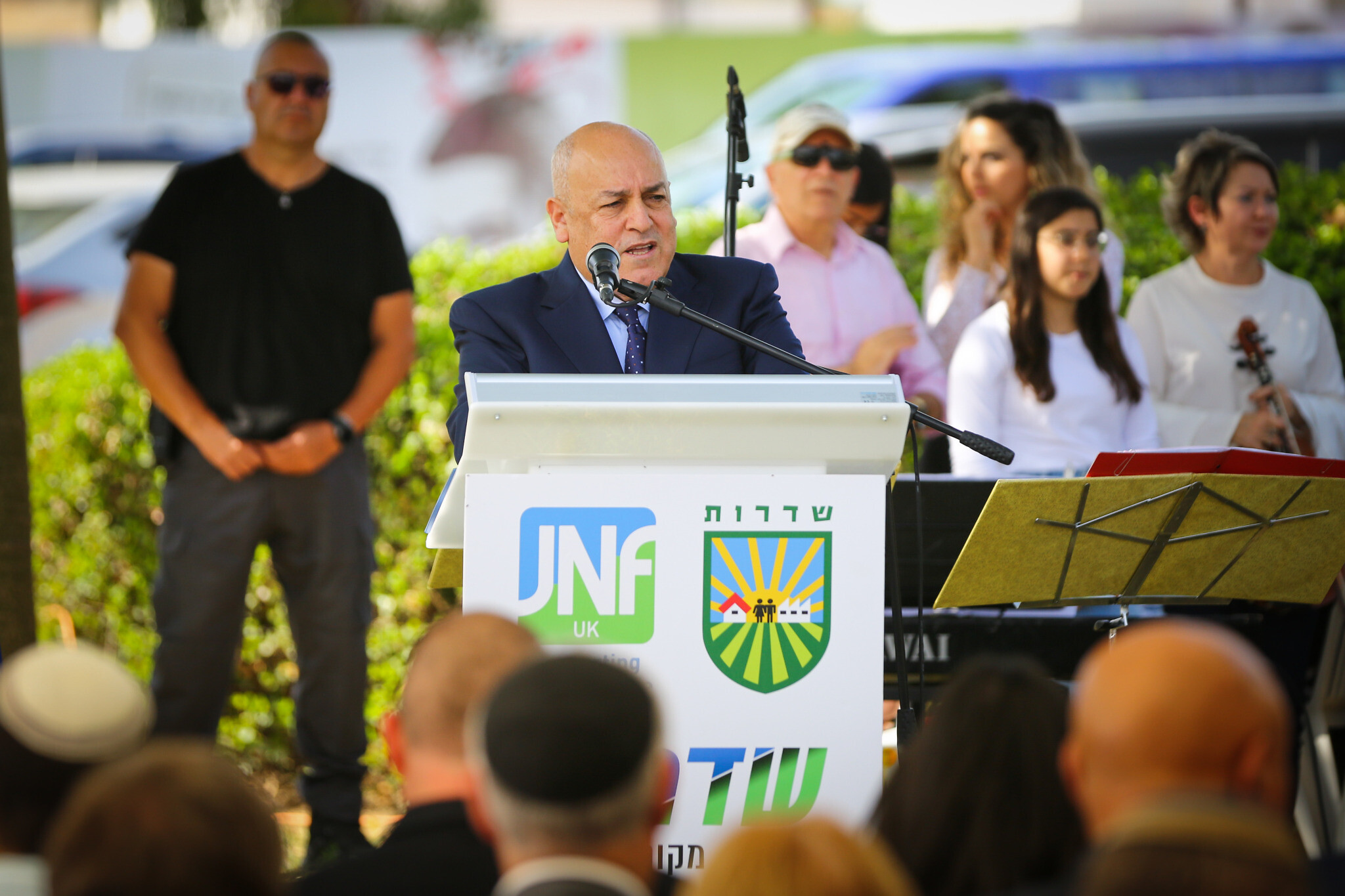 Businessman Samuel Hayek at a ceremony in the southern Israeli city of Sderot, marking the dedication of a city square in honor of late Prime Minister Yitzhak Shamir, on November 26, 2019. Photo by Flash90

It also noted  the failure of trustees at Britain’s oldest Israel charity to condemn Hayek’s remarks after he made them last month.

While the passing of the resolution did not mean any further action would be taken against JNFUK – it was a clear sign of the strength of anger at Hayek’s comments amongst a majority of Deputies on the communal body.

Opening the debate Rosen refered to the fight against antisemitism in the Labour Party under Jeremy Corbyn. He said the Jewish community needed allies from outside the community then, just as the Muslim community needed our support in the fight against Islamophobia. He said:”It was wrong then, and it is wrong now to accuse people of dual loyalty,” comparing allegations made against both the Jewish and Muslim communities.

Adrian Cohen, Deputy for Highgate Synagogue, was also a significant voice to support the resolution as the debate progressed.

Also speaking in favour of the resolution Amos Schonfield, Deputy for Masorti Judaism said this was “a moment that would give us legitimacy to fight antisemitism in the future.”

Schonfield noted that Hayek had not shown or said he was “sorry” for making his comments about Muslims in a piece he wrote on the issue last weekend. “We are simply expressing dismay at the current direction of the JNFUK, which for many people still holds a special place and the fact it has been reduced to this is embarrassing,” added Schonfield.

UJS Deputy Jessica Baker said:”Samuel Hayek’s comments fly in the face of friendships” made on campuses between Jewish and Muslim students in the fight against antisemtism and anti-Muslim racism.

Speaking against the resolution, Laurence Julius, a member of JNFUK’s executive board, said the charity “makes a difference” with projects such as schools for disabled children. He added the charity was not involved “in anything controversial.”

Other speakers in the debate opposing the motion included Robert Festenstein and Ruth Hart.

Later in the plenary Dame Louise Ellman addressed Deputies and spoke of the importance in opposing all forms of racism in society.

Jewish News understands those proposing the motion came under considerable pressure beforehand to withdraw it – with some Deputies arguing it was inappropriate after the Texas synagogue hostage incident.

In an email to all Deputies ahead of the plenary Prestwick Synagogue Deputy Festenstein attempted to compare criticism heaped on Hayek over his comments with that of criticism of the television presenter Caroline Flack, who took her own life.

Festenstein also wrote that the resolution should be pulled as Hayek’s views are shared by “other communal figures.”

A JNF UK spokesperson said: “For 120 years, JNF UK has been building Israel and helping its poorest citizens to become part of its success story. The charity does not take a stance on immigration or other British domestic policies.

“In expressing his recent views — which he has since clarified in the Jewish Chronicle — Mr Hayek did not speak for the charity or its trustees. We have repeatedly made this clear.”