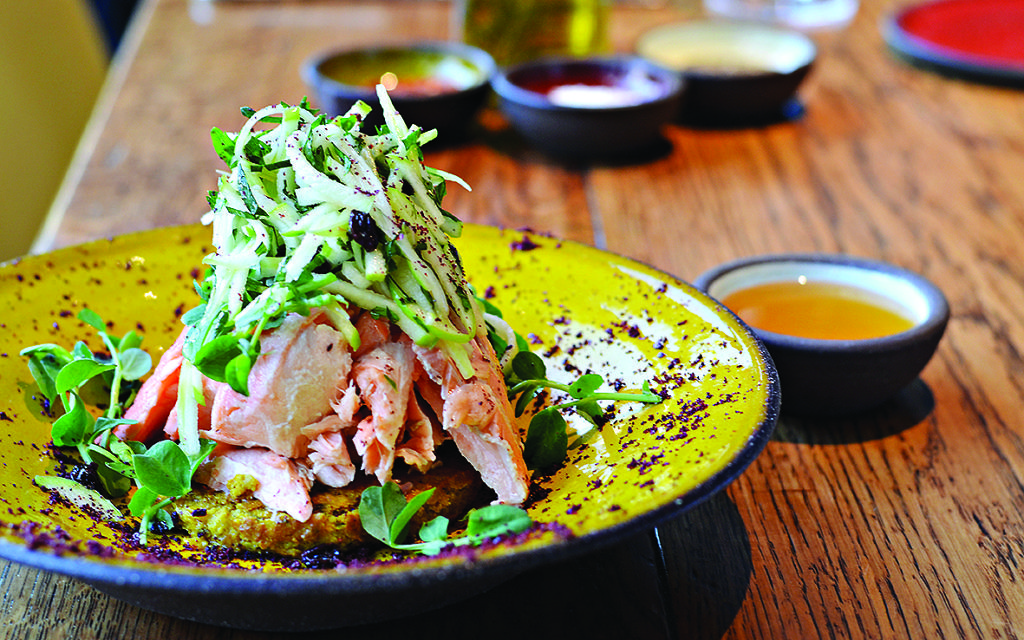 Every family has its own traditions when it comes to the foods we eat over the New Year. Ashkenazi Jews tend to reach for the challah to dip in honey, while Sephardis dip in sugar because honey was a fouling agent if added to the incense in the Temple.

When it comes to Yom Kippur, there are even more traditions. Some start the fast on a full blown Friday-night style dinner and finish with a deli-style spread; others believe in starting with a light meal and finishing with something heavy, such as steak.

Israeli-born Eran Tibi comes from a home where the focal point was eating, cooking and baking. Eran remembers helping his mother Rachel in the kitchen to cut off okra tips from the moment he could pick up a knife, before progressing to help his father Victor in the family bakery.

In the UK, Eran started out in the kitchen at Ottolenghi, before helping his friend Josh Katz set up Made in Camden at the Roundhouse. Then Eran and Josh became part of the team behind Zest, which Eran now spearheads.

“For me, Rosh Hashanah is about traditional symbolic dishes,” he says. “I love to see how, dependent on their background, people interpret meanings and customs and then translate them into the dishes they make.

“For instance, a family in the UK may typically serve a head of a fish for Rosh Hashana, while a Syrian family like my aunt’s would do something completely different. She once served a whole head of lamb glazed in honey with an apple stuck in its mouth!”

When it comes to Yom Kippur, Eran is very much focused on spirituality. “I see Yom Kippur as a spiritual day with an individual meaning for each person,” he explains.

“Before the fast, I recommend a long meal with small portions of many different dishes, such as filling salads containing butternut squash, aubergines, potatoes, rice, mezes and light protein, such as chicken, eggs or fish – all with lots of water.

This is ideal not just for the nutritional value, but also as a way to symbolically prepare your soul for a day of self-intervention. “To break the fast, start with a small spread of ‘sins’ – mainly tea and cakes, followed by fresh and dried fruits to kick-start the brain.

“A couple of hours later, my family start our late night feast with a big cut of meat, chicken or fish. This is served with an array of mezes, dips and breads with lots and lots of wine. That’s considered the first ‘sin’ of the year.”

Next up, Silvia Nacamulli unveils her recipes for a delicious Rome-inspired holiday:

Italian-born caterer and cookery demonstrator Silvia Nacamulli came to London 15 years ago to study Politics of the World Economy at LSE.

Cooking was always her passion and, in 2002, she made a radical career change – cooking and teaching the Italian-Jewish cuisine with which she was brought up. She now teaches at corporate and charity events, does catering and runs cookery courses in Italy.

“Italy is one of the oldest Jewish communities in Europe. Jews have been living in Rome, where I am from, for more than 2,000 years,” Silvia explains.

“Italian Jewish cuisine has been inspired by traditional Italian cooking and changed in order to conform to kosher rules. Every region in Italy has its own traditions. In Venice – where my late grandfather was from – they eat Sarde in Saor, delicious sweet and sour sardines with pine nuts and raisins.

In Rome, we do a seder for Rosh Hashanah, where we say the blessing over 10 foods – each blessing is a symbol for something or a wish. These include pomegranate (fulfilment), pumpkin (to remove bad judgement on our people), fish (fertility), figs (wish for a sweet New Year), dates (to rid our enemies and bring sweetness) and a few others.

The meal has dishes that reflect the seder, such as risotto or pasta with pumpkin, or chicken with pomegranate and honey. “In Tuscany, a traditional dish is Sfratti – honey and walnut filled cigars. Sfratti means ‘eviction’, to remember the time when the Jews were evicted from their homes to go to live in the ghetto.

“When it comes to Yom Kippur, a broth or soup is the best and healthiest way to both start and break the fast. We make a wonderful chicken and beef broth with small egg pasta.

“In my family, 30 of us start the fast with an incredible 17-course meal! Traditionally we break it with soup and a steak – just immediate family as my dad gets very hungry and he doesn’t want to wait for anyone!”

• Join Silvia Nacamulli on her cookery course in Umbria from 19 to 24 October. More details at www.cookingforthesoul.com