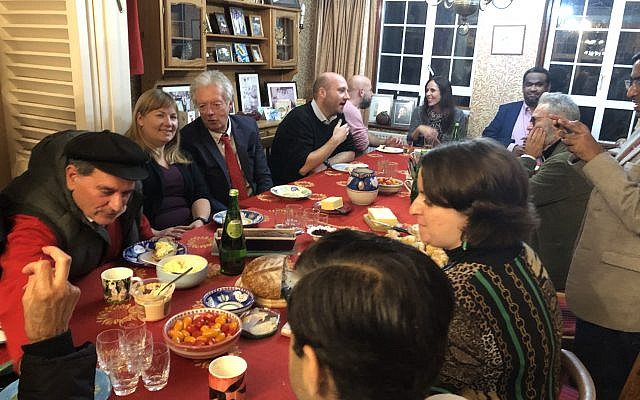 A Muslim interfaith leader has warned that levels of antisemitism are the “canary in the coal mine” for intolerance against other communities.

Fiyaz Mughal, founder of Muslims Against Antisemitism, described on Thursday discrimination against Jews as “that weather-vane […] that canary in the coalmine.”

“If Jewish communities are being targeted, you can bet your bottom dollar, other communities will be targeted,” he said.

Speaking of a religious and social connection, Mughal said Jewish and Muslim communities share a “deep sense of loyalty” in the fight for human rights and “a sense of comfort with each other.”

Mughal spoke to Jewish News at the first Succot event organised by Muslims Against Antisemitism (MAAS), which was held in the North London home of senior Masorti rabbi Jonathan Wittenberg yesterday evening, who described interfaith dialogue as “supremely important at this time of fragmentation.”

Guests gathered in Rabbi Wittenberg’s succah, which was decorated with home-grown fruit and vegetables from his garden, to listen to the Masorti leader discuss the importance of the annual Jewish festival and its relevance today.

Over 20 guests attended the event titled “Muslims and Jews: Embracing our common humanity,” including cross-party councillors and interfaith activists.

Esmond Rosen, co-chair of Barnet Multi-Faith Forum, said interfaith events have helped communities come together after traumatic events such as the Grenfell fire or the Manchester arena bombing to provide support and coordinate “food banks and shelter for the homeless.”

“At the moment, there is lots of division and fighting in the world but […]  Muslim and Jewish communities share so much,” he added.