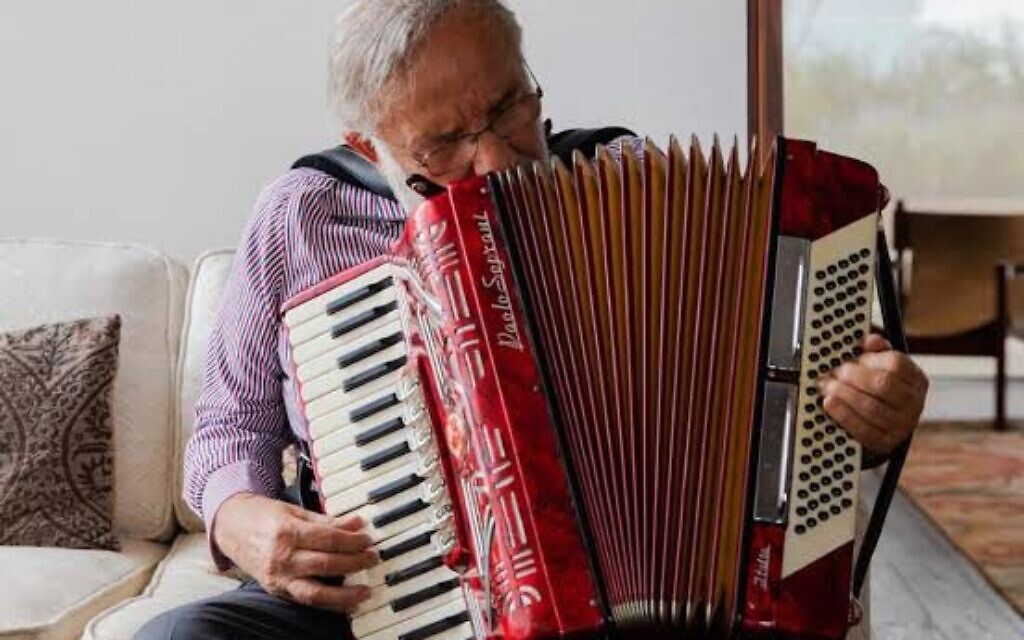 Ichak Kalderon Adizes: takes after his father. Here is Dr Adizes playing the accordion at his house in Guadalajara, México in 2019.

A Serbian-born professor and management consultant has pledged to nominate two Albanian brothers as Righteous Among the Nations for rescuing him and his family during the Holocaust.

Ichak Kalderon Adizes, in his memoir, The Accordion Player, relates how he, his grandmother and his parents were hidden in a remote Albanian village for nearly two years by two brothers, Ali and Rajib Brahimi. The family pretended to be Muslim after a local qadi, or Muslim priest, had brought them to the village. They had previously spent time in the Monopol camp in Skopje, Macedonia.

But for many years Dr Adizes believed that neither the brothers, nor anyone in the village, knew that his family were Jews. Certainly his parents kept up the pretence, telling their protectors that they were “Bosnian Muslims” who had different traditions of prayer from the villagers.

Over one fateful Ramadan festival, Dr Adizes’ father made the then seven-year-old go upstairs in the house where they were living so that the family could eat. If he heard any movement from the Brahimi brothers, he was instructed, he had to jump up and down to warn his parents. Devout Muslims do not eat during Ramadan, except to break their fast late at night.

In 1996, however, an Israeli TV company took Dr Adizes and his father back to Albania to retrace their steps of hiding and escape, and, miraculously, to reunite with the Brahimi brothers and their extended relatives.

During the filming of the programme — “I want to remember, he wants to forget” — it became clear that no-one in the village had believed any of the Adizes’ stories about themselves. Dr Adizes’ father, Salamon (Moni) Adizes, was a flamboyant character who had acted as the village doctor during their time in the village. His standard method of treatment was to prescribe time out in the fresh air and sunshine, though occasionally he did, as Dr Adizes records in his memoir, perform small operations and help with childbirth.

The Adizes family was terrified of being betrayed to the Italian fascists who roamed the mountain areas of Albania. But during the filming of the TV programme the Brahimi brothers declared that they had known all along that the family were Jewish, not least because the qadi who brought them to the village had told the villagers. They also knew that Moni was not a doctor — in real-life he was dyslexic and almost illiterate — but they allowed him to continue with the pretence.

After the war the family moved to Israel, where Ichak served in the IDF. Moni took work as a longshoreman in Haifa. Ichak had learned to play the accordion and armed with the instrument — and $50 in his pocket — he left Israel for America and began a stellar career in business and consultancy.

Over the years, from an unlikely beginning, Dr Adizes has advised prime ministers and presidents, including Shimon Peres and Jimmy Carter. He wrote his memoir over a period of 15 years after taking the manuscript away from the original writer. He says it was both very difficult to write and “very therapeutic”, saying that he realised his father “was a very tragic figure… he could not read or write, everybody put him down. The only one he had any authority over was me. So all his frustrations settled on my shoulders. But I forgive him”.

Moni Adizes, says his son, “forgot he was a Jew hiding from the Nazis. While for us it was the worst time of our lives, for him it was the best time of his life, because for once he was someone who mattered”.

There are a relatively small number of Albanians honoured by Yad Vashem for their rescue and saving of Jews during the Holocaust. The most recently named as Righteous Among the Nations was in 2015. Dr Adizes admits today that he had “failed” to nominate the Brahimi brothers in 1996, saying that the paperwork required had defeated him. But today, aged 85, he says he will try again and will go to Yad Vashem in April (he has a home in Israel and in Santa Barbara, California) to provide the relevant testimony.

Incidentally, as the author of a book (due to be published later this year) called The Accordionist, Dr Adizes still plays and owns three of the instruments, though he insists that one of his sons, a musician, plays much better than him. But it is the accordion which kept him going during his early years in the States, playing on street corners and in restaurants for tips while he put himself through college. His central message, he says, is “Im tirtzu — if you want it — it will happen”. He smiles as he says he takes after his father, Moni, in “chutzpah — I jumped, I made things happen.”

Holocaust and genocide specialist Stephen Smith, said: “The survival of the Adizes family is one of the most unusual I have documented. The stories of Sephardi Jews in the Balkans who four hundred and fifty years after the inquisition were subjected to the Final Solution is little known.  It was extremely meaningful to conduct my first interview in Ladino (with only school boy Spanish as a point of reference). The courage of the Muslim families who took life threatening risks to give the Adizes family safety are truly inspiring.  Yad Vashem has exacting standards for those who are recognized as Righteous Among the Nations and rightly so.  I am hopeful that the family that gave shelter to the Azides family is recognized for all that they did to give this family the chance to survive and thrive.”